Scientists Eliminate HIV In Mice, To Focus On Humans In 2020


Scientists have reportedly elimated HIV in mice and will start concentrating on humans in the year 2020. 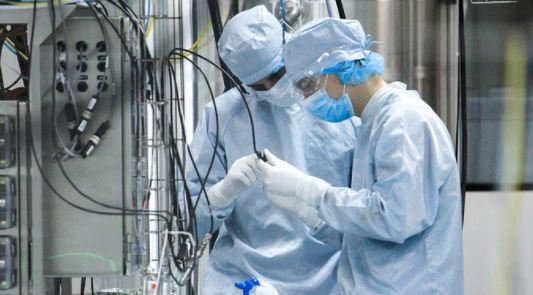 File photo
After decades of trial and error in search for a universal HIV cure, scientists have finally discovered a way of eliminating the virus in humanised mice for the first time.
This is a promising step toward a cure for the nearly 37 million people living with the virus.
The feat, reported in a study published on July 2, in Nature Communications came after a team spearheaded by HIV and gene-editing experts from Nebraska and Philadelphia used drugs and gene-editing to obliterate the virus from the genome of lab mice.
Presently HIV treatment cannot eliminate the virus entirely but can suppress its replication.
Antiretroviral therapy also requires lifelong use to stall the virus’ spread and — according to a study in May — it can potentially end the transmission of HIV between sexual partners.
LASER ART, a slow-acting drug, helped to corner the virus while CRISPR Cas9, gene-editing, attacked it — a method which the scientists said confirms the existence of a universal HIV cure.
“We thought it was a fluke, a problem with the graphs; that the cells carrying HIV had died; or that our assay system was wrong,” Howard Gendelman, director at the Center for Neurodegenerative Diseases (CND) at the University of Nebraska, said.
“What’s more, journals didn’t believe it. It was only after we repeated it a couple of different times that they accepted they had hit the veritable jackpot.”
After recording success with the technique in lab mice, the team is currently testing the method on monkeys and hope to commence clinical trial for humans in 2020.
“HIV is very clever in that it embeds its own genetic code into cells which, when activated, can make more virus. Methods to both kill active viruses and eliminate HIV genetic code in infected cells are needed,” said Gendelman.
“The number of mice used in the study is small. Further trials will be needed to confirm this exciting proof-of-concept study. However, it is still an open question as to whether such an approach would work in humans.”
Only two people have reportedly been cured of HIV, both of whom had terminal blood cancer and underwent “dangerous” bone marrow transplants. But, ever since then, the method has not worked in anyone else.
Top Stories