A man who was found out to have sent pornographic photos and other indecent images to people, has been punished. 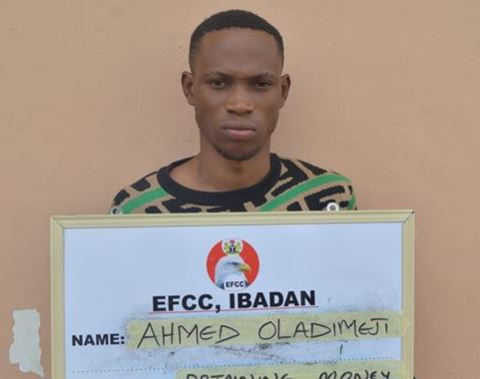 Ahmed Oladimeji
The Federal High Court in Abeokuta, Ogun State on Thursday sentenced a man, Ahmed Oladimeji, to four years imprisonment for sending pornographic and indecent pictures via a computer, The Nation reports.
Justice Ibrahim Watilat convicted Oladimeji on a one-count amended charge bordering on the offence, following a plea bargain deal with the Economic and Financial Crimes Commission, EFCC.
The offence is contrary to Section 24 (1)(a) of the Cybercrimes (Prohibition, Prevention Etc) Act, 2015, and punishable under Section 24(1)(b) of the Act.
Apart from the four months jail term, the convict was also ordered to restititue sums in foreign currency to victims of his fraudulent acts.
The court equally ordered the forfeiture of all items recovered from him during investigation to the Federal Government of Nigeria.
These include one Toshiba Laptop, one IPhone 6 and one Tecno KA phone.
Top Stories