Some highly aggrieved NNPC workers have staged a protest in Warri, displaying a coffin at the refinery. 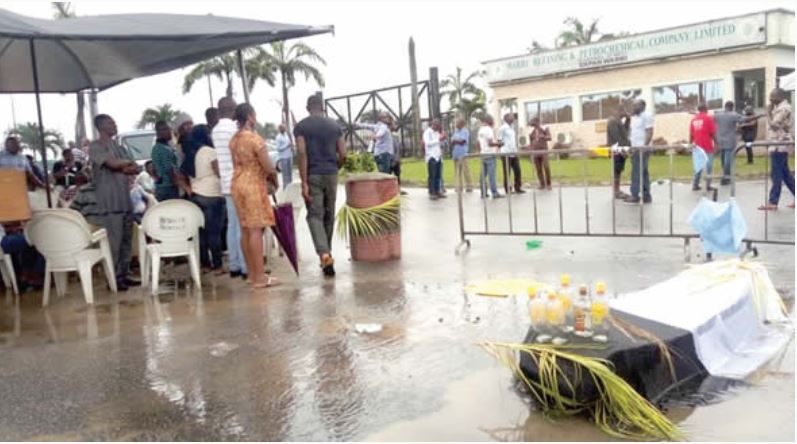 The coffin in front of NNPC gate
According to a report by Punch Metro, the ongoing protest by support staff members of the Nigerian National Petroleum Corporation at the Warri Refinery on Friday entered its third day with the workers putting a coffin at the main entrance of the Warri Refining and Petrochemical Company.
They also vowed not back out of the protest until their demands were met. One of their demands is to be converted into full staff members of the NNPC.
However, Saturday PUNCH gathered on Friday that production and other economic activities at the Warri Refinery had been fully grounded by the protesting workers.
More than 500 support staff members, who were joined by youths across the Niger Delta region, had been protesting since Wednesday over failure by management of NPPC to honour an agreement reached to convert them to full staff members.
Friday’s protest, however, witnessed a new dimension with the placement of a coffin at the entrance of the refinery.
Punch Metro, which visited the refinery on Friday, also gathered that a closed-door meeting summoned by the management of the refinery to resolve the impasse ended in a deadlock.
The meeting had in attendance some representatives of the Community Relations Committee from host communities and the protesters.
It was gathered that the protesters had vowed to refuse to shift ground until the Group Managing Director of NNPC, Maikanti Baru, personally wades into the matter to resolve the crisis.
“This is the third time we would be staging a protest; the last one was held in May, when the management assured us that the conversion would be finalised by mid-June. We are already in July and nothing has been done. We have not been paid salaries for several months also,” one of the protesters said.
They also claimed that most of the protesting workers had reportedly worked for eight to 28 years as support staff members.
The meeting took place at the NNPC Senior Staff Club, Warri with the Executive Director of Services, Dr Francis Ololo Sokare, mediating there.
The WRPC management had appealed for the suspension of the protest for additional two weeks to enable them to facilitate a meeting with NNPC officials, the Chief Operating Officer of Refineries in Nigeria and the CRC, in Abuja.
Sokare’s plea was, however, turned down by the leaders of the host communities and protesters. who demanded the presence of GMD of NNPC for them to suspend the protest.
Chairman of CRC from Ijala-Ikeren community, Adolphus Tosanwumi, said, “We told them that they should bring in the Abuja management of NNPC tomorrow, if the protest must stop. Our people are being treated like slaves in their own land.
“We’re fully behind the protesters and nothing will stop the protests until NNPC GMD comes to Warri to see things for himself and convert our people to staff members. These are the people ensuring that Warri Refinery remains functional.”
Efforts to speak with NNPC spokesman, Ndu Ughamadu, on Friday were unsuccessful as calls to his telephone line as at the time of filing this report were not connecting.
Ughamadu had earlier appealed to the protesters to suspend the protest as the management of NNPC was aware of their demands.
He said, “We have been announcing the various stages for recruitment. In that advertisement, it was thrown open to all the workers and they were asked to apply. How many of them applied? The casual workers were equally invited but that aside, we have engaged them. We told them that after this exercise, there is another stage.
“If they don’t fall into the first category, they may fall into the second category. That is what we are doing. We don’t have casual workers only in the Warri Refinery, we have casual workers in all of our subsidiaries, including the headquarters and many of them applied, and they are undergoing interviews now. There’s no discrimination in the process. I am not aware if there was an agreement with them.”
Top Stories