People have sustained different injuries after a tanker overturned on the popular Lagos-Ibadan expressway. 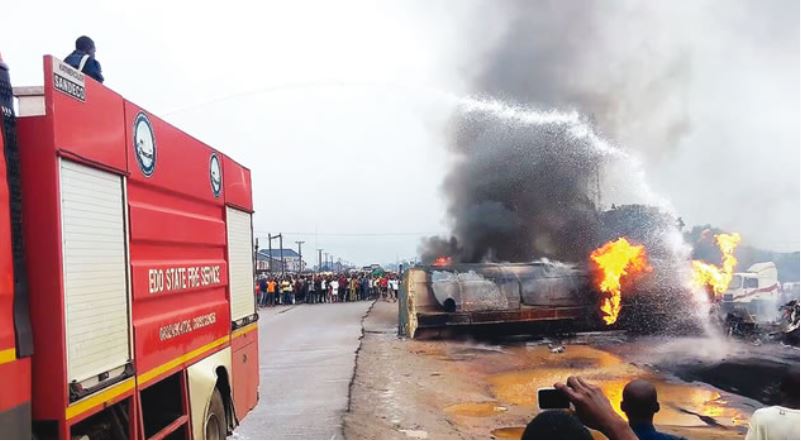 File photo
The Ogun State Command of the Federal Road Safety Corps on Saturday said that four persons escaped death, sustaining various degrees of injury when a tanker overturned at Ogere on the Lagos-Ibadan Expressway, Saturday Punch reports.
Mr Clement Oladele, the Ogun Sector Commandant of FRSC, told News Agency of Nigeria in Ota, Ogun, that the accident happened around 6:50 a.m.
Oladele explained that the tanker which was burnt beyond recognition was heading to Ibadan from Lagos when it lost control due to dangerous driving and excessive speeding.
He said that four persons sustained various degrees of injury in the accident that involved another vehicle, a Mitsubishi car with registration number DKA 653 ZP.
“The victims, who had parts of their bodies burnt, were rescued and taken to Victory Hospital, Ogere, for medical attention,’’ he said.
Oladele remarked that the FRSC officers and personnel of other sister agencies had already cleared the obstruction, to ease free flow of traffic on the expressway.
The FRSC boss, however, advised motorists to drive cautiously and adhere to all traffic rules and regulation that prohibit overtaking at diversion points and construction zones, to avoid crashes.
Top Stories