FRSC Boss Issues Stern Warning To Corps Marshals, Reveals What Will To Those Caught Collecting Bribe


The FRSC boss has sent out a stern warning to new corps marshals, revealing what will happen to all those caught collecting bribes. 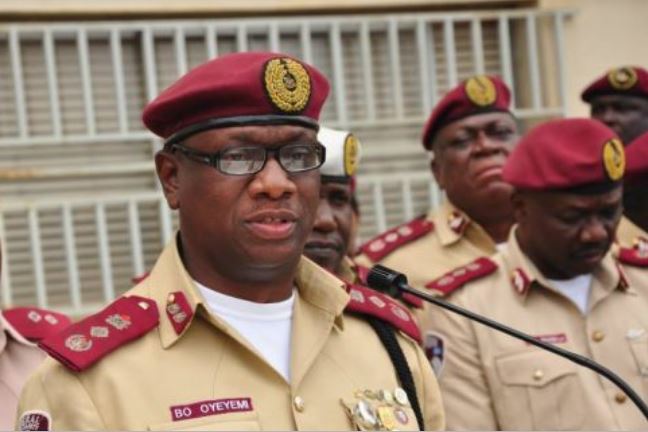 FRSC boss Adeboboye Oyeyemi
Corps Marshal of the Federal Road Safety Commission, Dr. Boboye Oyeyemi, has warned officers and men of the corps to shun bribery and corruption on the highways or risk being sacked by the commission, Punch Metro reports.
The Corps Marshal gave the warning on Saturday while speaking with journalists at the passing out parade of the 2019 Marshal Inspectors Basic Course which held at the NDLEA Regional Academy in Jos
He said, “We are not saying that they are not collecting bribe, but if you collect and we catch you, that will be the end of your career”
The Corps Marshal added “For long, I have been chairman of the disciplinary committee at the headquarters and I can tell you that those who are coming in (new recruits) are replacements for those people that have been sacked and some additional ones. So, FRSC has zero tolerance for corruption because if there is anything we don’t want to pervade our system, it is corruption and we can safely say that the corruption level in FRSC is near zero”
A total of 893 new marshal inspectors who were recruited across the country in June 2018 passed out on Saturday “having been adequately trained and found worthy in character and learning to join the commission.”
Oyeyemi, who spoke through the Deputy Corps Marshal in Charge of Training, Mr Kab Lawal, who represented him at the occasion added that the essence of recruiting the new personnel was to beef up the activities of the Commission and ensure a reduction in road crashes on the nation’s highways.
Top Stories