The Governor of Kaduna state has carpeted the northern elites after saying that the region is backward and uneducated. 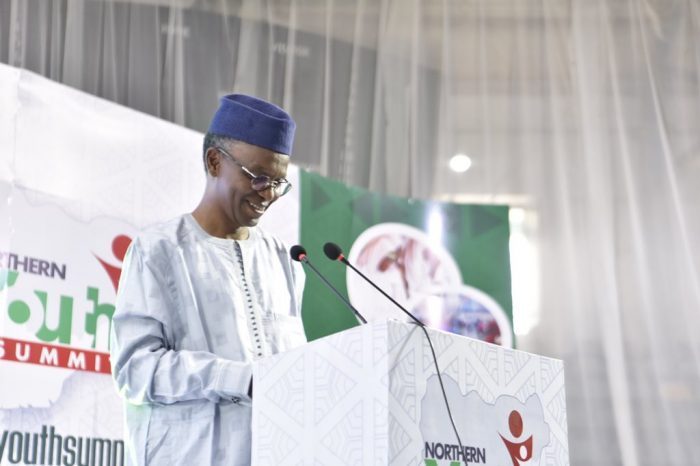 Governor Nasir El-Rufai
Kaduna State Governor, Malam Nasiru El-Rufa’i, was unsparing in his assessment of Northern Nigeria on Saturday as he described the region as backward, uneducated and unhealthy.
He also quickly added the positives, some that may be controversial: the north feeding the nation, producing its richest citizen, the northerners less involved in fraud and being more honest and the north being the most populous region.
El-Rufa’i gave this view during the Northern Youth Summit organized by Northern Hibiscus Initiative in Kaduna.
He said the northern region has made Nigeria a country of nations.
“Looking at the statistics, Nigeria appears to be a middle income country, but if we segregate those statistics across states and zones, you will see that in terms human development indicators, Nigeria consist of two countries; there is a backward, less educated and unhealthy Northern Nigeria and a developing, largely educated and healthy southern Nigeria.
“The theme of this summit, ‘Awakening the Arewa Spirit’ is very timely. When we talk about awakening the spirit, it means the spirit is either sleeping or dead.

“We have to speak the truth to ourselves and ask why is it that, northern Nigeria has development indicators similar to Afghanistan, a country still at war.
“Nigeria has the largest number of poor people in the world, most of them in northern Nigeria.
“Nigeria also has the largest number of out of school children, virtually all of them in Northern Nigeria.
” Northern Nigeria has become the centre of drug abuse, gender violence, banditry, kidnapping and terrorism.
“We have also been associated with high divorce rate and breakdown of families.
“These are the challenges that confront us. This is the naked truth that we have to tell ourselves.
“We must therefore as leaders at all levels have conversation about the way forward for our part of the country.
“Because increasingly, as many of you must have seen on social media, we are being considered as the parasite of the federal economy, even though, that is not entirely true.
“This is because Northern Nigeria still feeds the nation. The richest business man in Nigeria is still Aliko Dangote not someone from Southern Nigeria, thank God for that.”
He however noted that in spite of the negative statistics, northerners are generally considered to be more honest and less corrupt than other Nigerians.
“That is something we should be proud of.
“In addition, our demographic superiority gives us a very powerful tool to negotiate in politics and that is something we should be proud of and we should preserve. So, we have every reason to unite and not be divided.
“So, we still have a lot to be proud of. We should be proud of our culture and tradition, as well as unity.

“You hardly can find someone from Northern Nigeria convicted of 419 or being a Yahoo boy. That is something we should be proud of.”
El-Rufa’i said youth account for 80 per cent of the northern population as such the future of the region lies in their hands, “not in the hands of Dinosaurs like me.”
According to him, people of his age ought not to be in leadership if the youth will unite to assume their rightful place.
“In my view, we are here to prepare the next generation of leaders. That is why the agenda for this summit is very important.
“So, you should take the panel discussions very seriously and come up with very clear and implementable decisions that you will circulate to all of us elected to lead in Northern Nigeria.”
He said that the outcome of the summit should be forwarded to the Chairman of Northern States Governors Forum.
“We have to do something about the situation of Northern Nigeria and we must do so as a group of 19 Governors, not individual state Governors.
“I am however persuaded that, this gathering and its panel discussions will find solutions to the problems.” the governor said.
El-Rufa’i appealed to the organizers to make it an annual event, assuring that the Kaduna State Government will be happy to partly sponsor it.
Top Stories