The judge issued the order following an ex parte application by the Special Presidential Investigative Panel for the Recovery of Public Property. 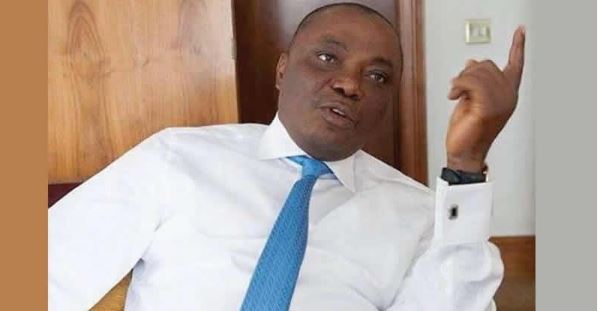 Peter Nwaoboshi
The Senator representing Delta North Senatorial District, Peter Nwaoboshi, on Sunday denied ownership of the 11 houses and 12 out of the 22 bank accounts frozen by the Federal High Court in Abuja.
The court, presided over by Justice Taiwo Taiwo made the forfeiture order on July 2 but a certified true copy of the order was only issued on July 5 (Friday).
The judge issued the order following an ex parte application by the Special Presidential Investigative Panel for the Recovery of Public Property.
The ex parte application was moved by the panel’s lawyer, Celsus Ukpong, who described the assets as suspicious or suspected to be far beyond the legitimate income of Nwaoboshi.
The accounts are in Zenith Bank, Access Bank, United Bank of Africa and Sterling Bank and were all joined as the 1st to the 5th respondents respectively in the said ex parte application.
The affected properties include, Suiming Electrical Company (RC 1090069) located along Asaba Airport Road, Asaba, Delta State; PON Filling Station, along Asaba Airport Road, Asaba, Delta State and a multi-billion naira estate under construction at Maryam Babangida Road, Asaba, Delta State.
They also include Cartage Cinema located at Okpanan Road, beside Rain Oil Petrol Station, Asaba, Delta State; Newbridge Filing Station, along Airport Road, Warri, Delta State; and a house at No. 8, Monu Olanrewaju Crescent, GRA, Asaba, Delta State.
The rest are, a multi-million building located at 41, Buma Road, Apapa, Lagos; Guinea House, No. 27, Marina Road, Apapa, Lagos; Plot 3011B, Kuranah Close, Maitama, FCT, Abuja, and Ceedeez School Hall Airport Road, Asaba Delta State.
But Nwaoboshi, who addressed a press conference in Abuja, said he had nothing to do with 12 of the accounts while the rest were meant for his salaries and allowances at the National Assembly.
He also challenged the SPIB officials to publish the official documents that linked him to the affected firms and buildings already seized by the court.
He said, “My attention has been drawn to a purported forfeiture order. I am yet to be served with the proceedings of the court. I only read it in the print media.
“I don’t have 22 bank accounts. That is not to say that there is any law that forbids me to own up to that number of bank accounts or more than that in Nigeria.
“Most of the alleged bank accounts belong to companies of which they thought I have interest in but I am not a signatory, a director, or a shareholder in any of the companies.
“It is therefore wicked, malicious, frivolous, scandalous and a height of irresponsibility to link me with them. It, therefore, portrays the level of the understanding of the law by the leadership of the SPIB.
“I challenge the SPIB to publish the names of the shareholders, directors, and signatories to the accounts for the public to judge.  For instance, the ownership of Suiming Electrical Company has been settled, in a case determined in 2017.
“Hon Justice Okon Abang pronounced the ownership of Suiming Electrical Nigeria Limited and the Guinea House on Marine Road, Apapa in  Lagos State which was also linked to me.
“All the companies mentioned are registered with the Corporate Affairs Commission. I wonder why the SPIB failed to carry out due diligence before rushing to the court to tarnish my image by securing a forfeiture order on firms that I have nothing to do with.”
Nwaoboshi said he had earlier approached a Court on June 10th this year to obtain an injunction ordering SPIB to maintain the status quo ante on his case as of May 31, 2019.”
Top Stories