Another staff of the Independent National Electoral Commission has insisted that he transmitted election results to a central server. 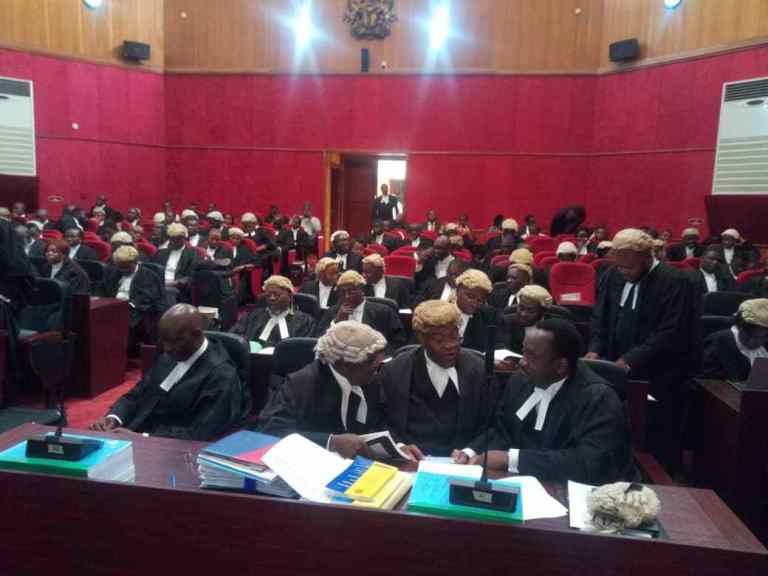 The witness, Olufemi Ogunride, who described himself as an INEC ad-hoc staff who was trained for three days ahead of the elections, said he received election result sheets from the presiding officer which he transferred into the smart card readers and consequently transmitted into the server.

Mr Ogunride was speaking at Friday’s session of the presidential election tribunal’s hearing of the petition by the PDP challenging President Muhammad’u Buhari’s re-election.

“All I know is that the P. O (presiding officer) brought the forms EC8C. I put the information from the form into the smart card reader which I transmitted to the server.”

Mr Ogunride, however, said during further cross-examination that he had never seen the said server.

He explained that he just transmitted information from the smart card readers into the server based on what he had been taught.

The PDP had requested to inspect the INEC servers after alleging that details of election results were manipulated by the Commission to favour Mr Buhari.

The elections tribunal denied Mr Abubakar’s request to inspect INEC’s server last month, saying granting such an order would presuppose that the court had ruled that the server actually existed.

The court deferred pronouncement on the server until a proper argument has been made by both teams in the substantive petition, which hearing began last week.

INEC had said it did not use a central server for the conduct of the election, saying doing so would have contradicted the Electoral Act. INEC maintained the position despite the claim to the contrary by some of its presiding officers in the election.

Some of the presiding officers and their subordinates have since sworn an affidavit to testify against the commission in favour of Atiku Abubakar, the PDP’s candidate and main challenger to President Buhari.

But the commission told the elections tribunal that it had no server and Mr Abubakar and his team were only being mischievous.

A former chairman of INEC, Attahiru Jega, also told PREMIUM TIMES that there was no server during his days at INEC, and expressed doubts about any recent installation of such facilities under Yakubu Mahmood.

Besides Mr Ogunride, seven other witnesses testified on Friday at the tribunal.
In a similar testimony by a PDP witness on Friday, the witness said the petitioners agents were driven away from all polling units across his local government during the February 23, elections in Borno State.

The witness, Umaru Ahmed, was the seventh witness to testify on Friday.

According to the witness, security officers chased away PDP agents in polling units across his local government area in Borno State.

Mr Umar accused security operatives of aiding the APC to manipulate results in various parts of his local government.

Also in a similar statement, another witness, Hassan Maisarauta who said he worked for the PDP in Potiskum, Yobe State, alleged that an APC local government Chairman threatened voters at his local government to either vote APC or have their farmlands taken away from them.

The tribunal adjourned the hearing till Monday following a request by the PDP that its remaining agents could not make it to the tribunal.
Top Stories