Atiku Raises Loud Alarm On Prevalence Of Poverty In Nigeria


He said the report indicated that poverty had become the fastest growing venture in Nigeria over the last four years. 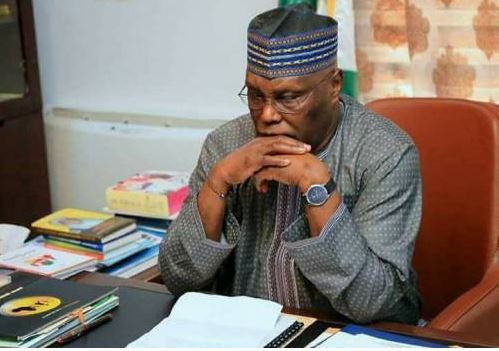 Atiku Abubakar
The presidential candidate of the Peoples Democratic Party in the February 2019 election, Atiku Abubakar, on Saturday said the recent report by the United Nations Development Programme, published on July 11, which said that over 98 million Nigerians were living in multi-dimensional poverty, was a frightening.
He said the report indicated that poverty had become the fastest growing venture in Nigeria over the last four years.
The former Vice President, in a statement by his media adviser, Paul Ibe, said there was an urgent and compelling need for institutions of the Nigerian state to understand that it was an appalling dereliction of duty to stand idly by and allow misery multiply in the populace.
According to him, this was no longer a grassroots problem.
He said, “The failure of our economy over the last four years affects everyone from top to bottom. Four years ago, Aliko Dangote, Nigeria’s richest man, was worth $25bn. However, his net worth in 2019 is less than half that. He joined thousands of industrialists whose wealth and their ability to produce, had eroded in recent years, and continue to do so.
“With the National Bureau of Statistics reporting a net job loss of over six million since 2015, we see that if industrialists have their wealth eroding, it affects their ability to create opportunities, which means that the trickle-down effect gradually dries.”
Atiku stated that the greatest national security threat Nigeria faced in 2019 was not Boko Haram/ISWAP or bandits but the ‘creation of the largest wave of poverty in human history in the country.’
He warned that the world was noticing, hence Foreign Direct Investment was shifting from Nigeria to Ghana, making Ghana the top recipient of FDI in West Africa in the last year.
He said, “And in the wake of this report by the UNDP, we are greeted with nonchalance by those who led us into this crisis. It is as though they think that as long as they and their families are not amongst those 98 million extremely poor Nigerians, things can carry on as before.
“But that cannot be allowed to be the case. Those who have the ability, including the Council of State, all former leaders, elder-statesmen, and especially the other arms of government, must begin to collaborate for solutions, before the number increases from 98 million, to all 198 million Nigerians.
“We must remember that we are stakeholders in the Nigerian project; stakeholders who must speak up for those 98 million people who are losing their voices to poverty.”
Top Stories