Buhari Not In Charge Of Armed Forces, Says Ezekwesili


The lecture was organised by the Wole Soyinka Centre for Investigative Journalism to mark the 85th birthday of the Nobel Laureate, Prof Wole Soyinka. 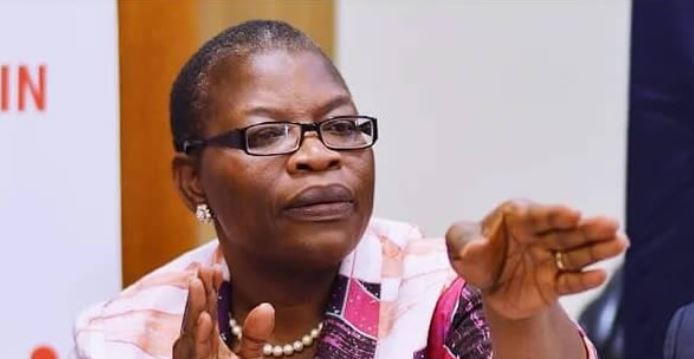 Dr Oby Ezekwesili
Former Minister of Education, Dr Oby Ezekwesili, on Saturday said President Muhammadu Buhari was not in charge of the country’s armed forces.
Ezekwesili, a co-founder of the #BringBackOurGirls Movement, stated this in an interview with journalists after speaking as a panellist in Lagos at the 11th Wole Soyinka Centre Media Lecture series.
The lecture was organised by the Wole Soyinka Centre for Investigative Journalism to mark the 85th birthday of the Nobel Laureate, Prof Wole Soyinka.
Other panellists were a Senior Programme Officer, MacArthur Foundation, Amina Salihu; Executive Director, Paradigm Shift, Gbenga Sesan; Director, Voter Education and Publicity, Independent National Electoral Commission, Oluwole Osaze-Uzzi; and Chairman, Editorial Board, Nigeria Info Radio Group, Rotimi Sankore. It was moderated by the Head of CNN Africa’s Digital Editorial, Stephanie Busari.
Ezekwesili, who was responding to the security problems in the country, following the murder of Mrs Funke Olakunrin, daughter of the leader of Afenifere, Pa Reuben Fasoranti, said  Buhari was not commanding the armed forces the way it should be.
She said, “I think that the President is the  Commander-in-Chief of the Nigerian Armed Forces. If security is failing in the country, that is the fastest way to assess the incompetence that the President has shown so far to an issue that affects the majority of his citizens.
“I do not think we should mince words and that is why I am not mincing words. We cannot have a President who is comfortable to be in the office, spending the night at the Villa, unconcerned about the type of challenges that we the citizens are facing.”
Meanwhile, eighty-five pupils drawn from 17 states and the Federal Capital Territory, Abuja, as well as the members of the Association of Nigerian Authors, Ogun State chapter, assembled at the residence of Prof Soyinka in Abeokuta to celebrate him at 85.
Top Stories