A man who specializes in selling stolen phones in the city of Lagos, has been finally nabbed. 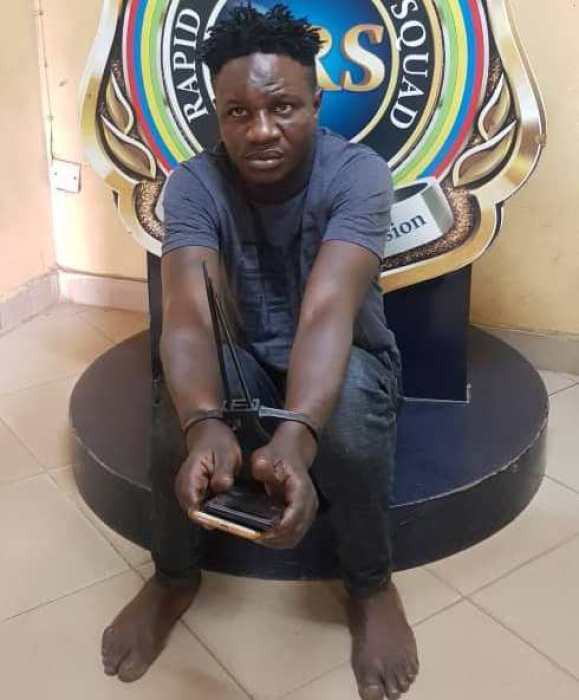 The suspect
According to Punch Metro, a suspected pickpocket arrested at the Computer Village, Ikeja, Lagos, has confessed to operatives of the Lagos State Rapid Response Squad that he made at least N18,000 daily selling stolen phones.

The suspect, Lawal Daodu, 31, was arrested on Friday around 5pm when he unsuccessfully attempted to steal a phone from the pocket of a passerby under the bridge in Ikeja.

Lawal, who had before his arrest stolen two android phones from passersby on that fateful day, was in the process of removing another android phone from the pocket of another victim when the phone accidentally fell down and attracted the attention of its owner.

He was promptly arrested by RRS officers attached to the Armoured Personnel Carrier stationed at under the bridge in Ikeja.

As the suspect was being interrogated on the sources of the phones in his possession, one of his victims, who was trying to find out what was happening, saw his phone in Lawal’s hands.

Lawal, in his confession to the police, explained that he was operating at the Computer Village, Ikeja, and the Tafawa Balewa Square, Lagos Island.

“In the afternoon, I resumed to steal a few more phones. I was attempting to steal the third one when the owner raised the alarm, which attracted the attention of the RRS men. They arrested me and unfortunately, just as I was trying to prove my innocence, one of my victims identified his phone in my hands.

“I don’t operate every time. I go out at times twice in a week and I make at least N18,000 from stealing phones on the average. There were times I made more than that, especially, when I succeeded in stealing expensive phones.

“I started as a pickpocket in 2017 and I had never been arrested before now. I buy and sell clothes at the Computer Village. I resort to pickpocketing occasionally.

“I sell the phones to Afeez and Lanre. They are street guys at the Computer Village. I was trained by Bello. I have not seen him in a long while.”

Commenting on the development, the Lagos State Police Command’s Public Relations Officer, DSP Bala Elkana, said the suspect was assisting the police to track down the buyers of the stolen phones at the Computer Village, Ikeja.
Top Stories