Highly revered Nigerian pastor, Enoch Adeboye has told the story of how he broke the cycle of poverty in his family. 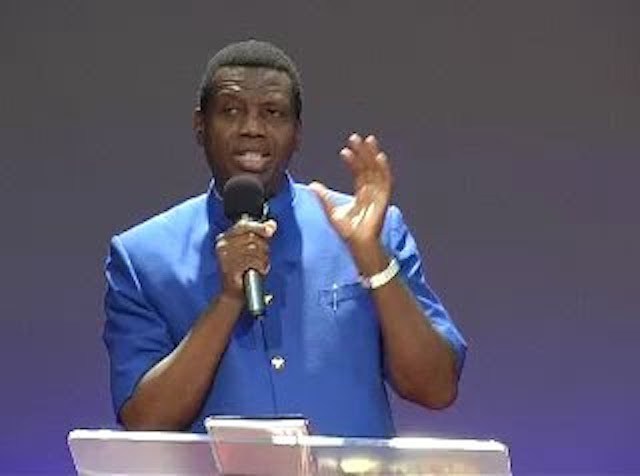 “Without God, I am nothing,” he is quick to point out.

Born and raised in debilitating poverty, it is a miracle that he is this powerful and influential globally.

But he didn’t sit at home, arms folded, for God to change his situation. At the July Holy Ghost Service of the church at the Redemption Camp last week, he revealed how he broke his family’s vicious cycle of poverty.

“It is said that some people came from a difficult background, but ours was far worse. So difficult was our case that it could be likened to being trapped in marshy land. An attempt at putting the second leg in the mud to remove the trapped leg results in both legs getting entrapped. We, however, thank God that we can testify to His awesome power in our family today,” Gabriel Adeboye said.

Preaching a sermon with the theme, ‘Swimming in Glory – Part 7 (Born to Be Great)’ the General Overseer recalled: “I looked at our situation then; my father was so poor that poor people called him poor! And yet he had two wives and many children.

“I looked at his farm; it wasn’t big enough to support his family, yet it was going to be divided amongst us when he died.

“So, I made up my mind that I wasn’t going to die in that poverty.

“And I knew that the only way out was to study hard in school. I did and gained admission to Ilesha Grammar School (Osun State).
“But when the results came, my mother called me inside the room, and said ‘you this boy, what are you trying to do? You want to expose us to ridicule? You know we have no money, and you say you want to go to Grammar School.’

“Then she begged me, ‘please my boy, Christmas is coming, I will buy you good clothes. Forget about this Grammar School.’

“I told her, ‘I don’t want Christmas clothes, I want to go to school.’

“She said, ‘we don’t have money.’ But I replied she would find the money.

“I’m talking about 1955. I told my mother I would not eat until she paid the deposit of my fees to the school. She thought I was joking. The first day I didn’t eat anything; the second day I refused to eat. By the third day, since I happened to be her only son, she and my father got the money for a deposit.

“I kept on living my dream: through various means, I finished secondary school and gained admission into the university.

On another occasion Mr Adeboye had related how poor he was in secondary school. “I walked bare-foot for the first eighteen years of my life – in rain and in sunshine.

“I can never forget my final year in the grammar school. I was eighteen years old. I was a fairly good student, and had won many prizes as a testimony to that. In those days at Ilesha Grammar School, they used to have what they called a Prize-Giving Day. That was a day before the school vacation; a day when all those who won prizes would come forward, shake hands with the principal and receive a prize for the subject they excelled in.”

“For those in the final year, there was a dress code – a white shirt over a pair of white trousers, and shoes to match. I had won a prize, but had no trousers – white, black or red. Shoes? I didn’t even know what that looked like! What was I going to do? They were going to call my name in front of everybody. It meant that I was going to go forward in the only a pair of shorts I owned, barefooted. I started lamenting, God you know I have no trousers, why did you allow me to win a prize?

“It was at that stage that one of the boys in the hostel called me, “Ademaths.” (That was my nickname). And I answered, “Yes.”

“He summoned me over and said, “I have six pairs of trousers, I don’t know which one to wear tomorrow. Can you help me choose?”

“I helped him choose one and then said to him, “Emmm, you know I don’t even have one to wear.”

“Although the boy was much taller than me, I didn’t care. As far as I was concerned, trousers were trousers. Glory be to God! So I chose a pair. When I wore them, I had to pull the waistband up to my chest!

“It was then I remembered that I had an uncle somewhere. He was as poor as a church rat but I remembered I had seen shoes on his feet before. So I went to see him and asked for the shoes. The decent pair I saw on him, he said he couldn’t let go, but that he had a pair of mended sandals to spare. The sole of the sandals was made from lorry tyres, so they called it Odutola tyre.

“He gave me the sandals and because I had never worn sandals before, I had to practise how to walk in them. At last, the Prize-Giving Day came and, glory be to God, I had trousers and a pair of sandals to wear to the occasion – a pair of borrowed trousers over Odutola tyre-sole sandals. That didn’t matter to me as I walked up there and got my prize.”

Continuing his story at the service, he said: “At that point (after gaining admission to the university), I approached the authorities of a school in Ondo State, and they agreed to sponsor me, but they wanted me to study Mathematics because they needed a Mathematics and not an English teacher. English was my best subject, but I had no choice; I went for Mathematics.

“They demanded that I returned to serve them for five years, and I said no problem. I graduated and went there to serve them. But after two and a half years, I became restless: I was getting old and didn’t want to stop with B.Sc.

“I gained admission to do M.Sc. and begged them to let me go for my Masters, assuring them that I would return to finish my bond.

“They didn’t believe me, but after obtaining the Master’s Degree at the University of Lagos, I returned to the school.

“But by then, I was becoming an embarrassment to them because I had a higher degree than my Principal. After another one and a half years; I begged them to allow me to get a PhD and return, but they said, “you are free to go, and you don’t have to come back.”

“To be great, you must be willing to pay the price,” Mr Adeboye told the large congregation.

The Praise and Worship session of the service was a time for people to dance ecstatically to good music delivered by the Mass Choir, with their performance earning the pastor’s commendation. It was also a night of amazing testimonies, including that of a medical doctor who said he was cured of cancer through prayers. That same night, Folu Adeboye, the wife of the General Overseer, again led the congregation to pray for peace in Nigeria and other nations; while there was a strong response to the altar call for salvation.

The millions of worshippers at the Holy Ghost Service must have been surprised to learn that some protesters went to the Camp days later to demand that Mr Adeboye speak about the security situation in the country. Before delving into his sermon, he had addressed the urgent need to stop the killings in the land.

He warned that the continuous shedding of innocent blood in the country could lead to an epidemic or plague.
Explaining the spiritual connection between bloodshed and plagues, he said when innocent blood is shed, it goes into the ground, and too much makes it (earth) respond in the form of epidemics.

“Blood is powerful, blood has a voice, and it speaks. When the ground is saturated with the blood of innocent people, the ground speaks.”

Stressing that too much shedding of innocent blood in a country is likely to lead to disease, he urged the church to continue praying for the bloodshed to stop.
***
Source: PREMIUM TIMES
Top Stories