Atchison was freed from Tulsa County jail after a judge declared him innocent in a 1991 murder case. 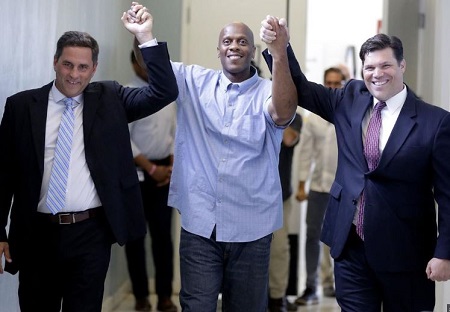 Corey Atchison (middle) and his lawyers

A judge on Tuesday freed an Oklahoma inmate who has served nearly three decades in prison for a 1991 killing, saying he did not commit the crime.

Corey Atchison, 48, was released Tuesday by Tulsa County District Judge Sharon Holmes, who said she believes a key prosecution witness was coerced and that Atchison was innocent of the crime.

"I don't really know what I want to do, because my goal all these years was just to be free," Atchison said following the ruling.

Prosecutors immediately filed a notice of appeal of the ruling and former District Attorney Tim Harris, who prosecuted the case as an assistant district attorney, has filed an affidavit denying he ever coerced a witness.

Atchison was convicted and sentenced to life in prison in 1991 for the fatal shooting of James Lane in Tulsa in 1990 during what police said was a gang-related attempted robbery.

The finding of "actual innocence" by Holmes makes Atchison eligible for up to $175,000 in compensation for a wrongful conviction under Oklahoma state law.
Top Stories