The Nigerian army has confirmed the killing of its personnel by Boko Haram terrorists in an ambush. 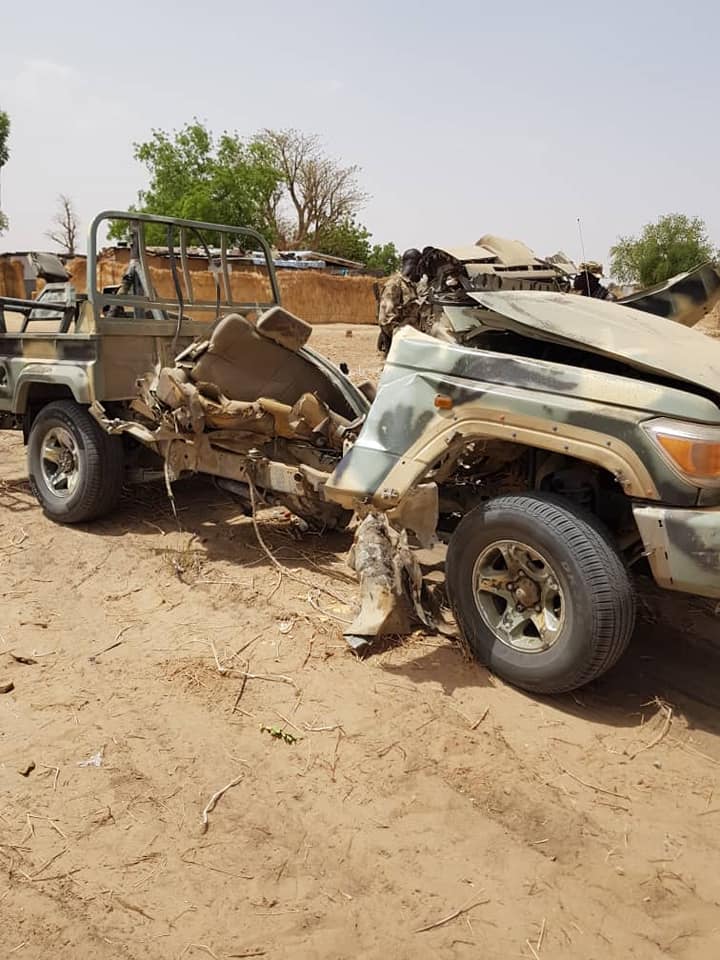 A scene of the incident (Photo:Nigerian Army/Facebook)
The Nigerian Army has confirmed the killing of an Army Colonel and a Captain in an ambush laid by Boko Haram terrorists in Borno/ Yobe states axis.
The Deputy Director of Army Public Relations, in Charge of the 212 Battalion in the northeast, Col Ado Isa said in a statement that the incident happened when troops were in hot pursuit of terrorists who came to attack a military base.
He said three soldiers were also killed in the attack, while the Chief of Army Staff, Lt Gen. Tukur Buratai has commiserated with the families of the fallen heroes.
The statement by Col Isa reads: “Troops of 212 Battalion deployed at Forward Operating Base (FOB) Jakana, on Wednesday 17Th July 2019 dealt with and neutralised unconfirmed number of Boko Haram/ISWAP Terrorists when they woefully attempted to infiltrate their base in dire need for logistics.
“The terrorists came at about 1845 hours in 7 Gun Trucks and fought fiercely to infiltrate the camp, but the attack was thwarted with heavy fire and bombardment by the gallant and patriotic troops who were vigilant and battle-ready.
“The terrorists couldn’t bear the firepower any longer after losing a significant number of both equipment and personnel in an exchange of fire.
“They lost initiative and withdrew in disarray along the Benisheikh – Damaturu axis, – abandoning a damaged utility Gun truck which was earmarked to convey looted items.
“Troops immediately followed in hot pursuit and the following items were captured:
1 x Anti Aircraft Gun
2 x Rocket Propelled Grenade (RPG) Tubes
2 x AK 47 Rifles
15 x Machine Gun rounds
and 12 x AK 47 NATO rounds.
“Sadly, a Colonel and a Captain, as well as 3 soldiers on transit from Maiduguri to Damaturu, run into an ambush staged by the routed/fleeing terrorists from the Jakana axis which led to their unfortunate death.
“The Chief of Army Staff (COAS), Lieutenant General Tukur Yusuf Buratai while commiserating with the families of the fallen heroes reiterated that “Personnel of the Nigerian Army will never be deterred in the ongoing noble and patriotic fight against terrorism and insurgency in the North East”.
“He further commended the efforts of the entire troops in the theatre and charged them to remain focus, highly committed and professional in the discharge of their constitutional roles.
“The sacrifices of the fallen heroes in the ongoing fight against terrorism and insurgency is no doubt painful to all, but that will further spur us to do more to ensure that our country remains secured, peaceful and free from terrorist activities for the overall interest of the nation.”
Top Stories