A man of God has called on the government to ban Big Brother Naija reality show saying it promotes immorality. 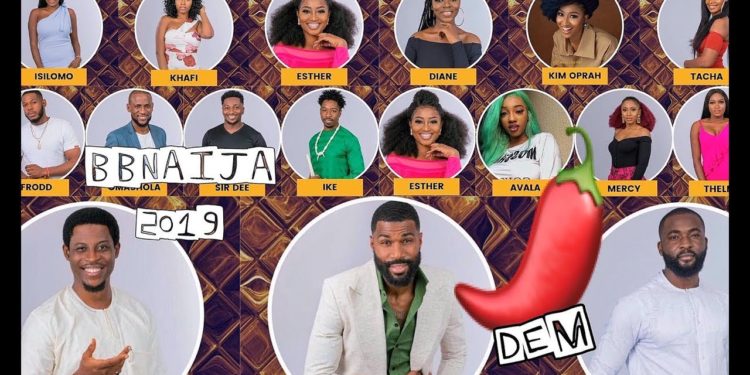 BBnaija contestants
Pastor Felix Ajide of King Jesus Praiseland Assembly has said that the ongoing Big Brother Naija sieason (4) show promotes immorality and is not good for the society.
Ajide told News Agency of Nigeria on Friday in Abuja that the show was pornographic in nature, adding that it had no moral value and advocated for its ban.
He said that the resources used in promoting the show should be used for the development of the society.
“The show should be banned because there is nothing to learn from the show, we are only watching immorality. If the western world is doing it, we do not need it here in Nigeria; we need deliverance in this country,” he added.
On the contrary, a Muslim woman, who pleaded anonymity, said it was not necessary for the show to be banned.
“Why should it be banned, it is optional for you to watch or better still unsubscribe that particular channel, if it is offensive to you.

“Most of the things people are complaining about such as the bathroom section are no more aired.
“It has also created opportunities to showcase our culture as well as give room for people to sell their products and give added value to their products,” she said.
The Muslim Rights Concern has labeled the reality show as ‘immoral, dangerous and bohemian’ and also wondered why the Ministry of Information and Culture is doing nothing over the show.
She, however maintained that the show had given room for employment, like the cleaners that keep the place clean and the hair makers among others.
She said that the show was an avenue to improve Nigerian economy such as in data buying.
She also described the show as a means where the house mates showcase what they are made of as well as a means of identifying their potentials.
She therefore advised the organisers of the show to ensure that housemates do not expose their nudity so as not to be seen as a pornographic show.
Also speaking, Chinonye Anokam, a civil servant, described the show as an avenue where Nigerian youth discover their hidden talents and realise their dreams.
Anokam said that the show was entertaining and described it as a place where potentials are harnessed as well as an avenue for promoting unity among Nigerians.
“Outside the social aspect of the show, there are other things to learn from the show such as how to live with people with different upbringing among others.
“You might not know the talent you have but the show presents the avenue where people discover their talents,” she said.
Anokam, therefore, suggested that the organisers of the show should have restrictions in the house in terms of relationship between the opposite sexes.
She, however, suggested that participants should focus on the core objectives of the big brother show.
Mr Mustapha Suleiman, a businessman, said that the show was unethical and supported the called for it ban.
He emphasised that there was nothing moral to learn from the show, adding that some participants on the show are living fake life.
-NAN
Top Stories