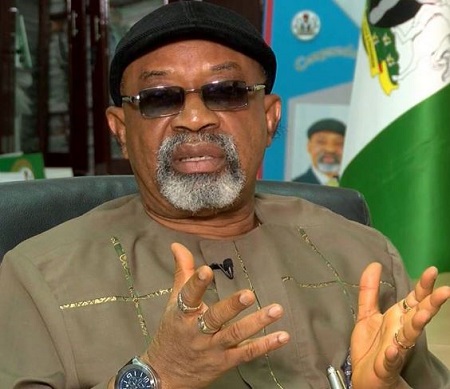 Dr. Chris Ngige
The immediate-past Minister of Labour and Productivity, Dr. Chris Ngige, on Friday, stirred many, including some Senior Advocates of Nigeria into laughter at the Presidential Election Petition Tribunal in Abuja.

Ngige, who attended  the proceedings of the tribunal for the second time caused the laughter while trying to make a joke out of an alleged server of the Independent National Electoral Commission said to be containing the authentic results of the February 23, 2019, presidential election as claimed by the Peoples Democratic Party and its presidential candidate, Alhaji Atiku Abubakar in their petition.

Shortly after, the Justice Mohammed Garba-led tribunal of five judges went on break on Friday, Ngige walked up to a group of SANs having a chat within the courtroom.

They were joined by the PDP’s Vice- Presidential candidate, Peter Obi, who had succeeded Ngige as the governor of Anambra State.

After the exchange of greetings, Ngige held Obi by his hands and walked him up to where a heap of documents produced in court by INEC at the instance of the petitioners was lying.

On getting to the point, which was just some few steps from where they were standing, Ngige, who is far shorter, held Obi by the shoulder with one hand and lowered his other arm pointing to the heap of documents, and said, “These are from my server.”

The whole courtroom burst into laughter.

Obi, too could not hold back laughter as the ex-minister continued holding him by the shoulder, with both seeming to out‎laugh each other.
Top Stories