Algeria has become the 2019 African Cup of Nations champions after defeating Senegal in the finals. 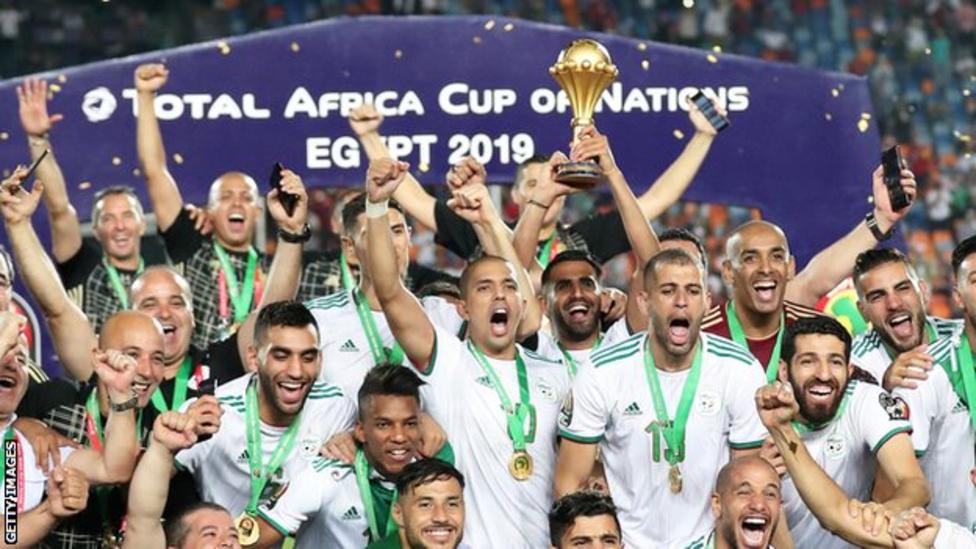 AFCON 2019 champions, Algeria
The Desert Foxes of Algeria have won the 2019 African Cup of Nations, AFCON, tournament in Egypt after beating Senegal 1-0 on Friday.
It was Algeria’s second time of winning the AFCON after 29 years.
Algeria opened scoring through Baghdad Bounedjah on 2nd minute. He tried his luck from the edge of the box and his shot took a deflection and went past the stranded Alfred Gomis.
On 38 minutes, there was a penalty appeal after M’Baye Niang of Senegal went down under a challenge from the defender. All players chased the referee but he was not interested in the penalty claim.
Few seconds later, Niang wasted a big chance to draw Senegal level. He unleashed a shot from the edge of the box and it went narrowly over the crossbar.
On 60th minute, Adlene Guedioura of Algeria handled the ball and the referee awarded a penalty, but he was called by the Video Assistant Referee, VAR to take a second look.
Referee Neant Alioum came back after watching a replay and quickly reversed his decision to award a penalty after a VAR review.
Niang had chance to draw level for Senegal on 66th minute as he picked up an inch-perfect pass inside the box and fired the ball just over the crossbar.
On 69th minute, a good pass found Youssouf Sabaly on the edge of the box, and he drilled the ball towards the roof of the net. Rais M’Bolhi was almost caught out but pulled off a brilliant save at the last second.
With 68 percent ball possession, Senegal could not dent the Algeria’s defence. The Senegalese also had 11 goal attempts while Algeria had one. While the Algerian keeper saved three clear goals attempt, the Senegalese keeper had no save.
Watch highlights below:
Top Stories