A woman has gotten herself into very serious trouble after she accidentally 'killed' her baby during a fight. 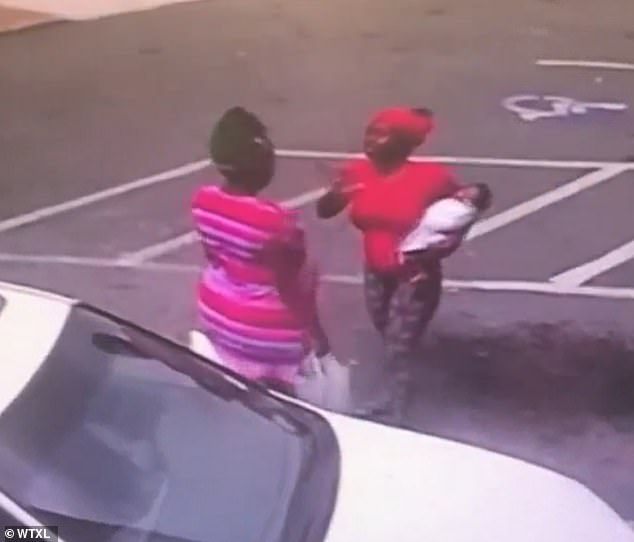 The fight scene
A Georgia mother has been charged with murder for dropping her three-month-old baby while being slapped by a woman outside a beauty store.

On July 19, she got into a fight with an unidentified woman outside a beauty store in Moultrie, Georgia, and dropped her three-month-old son in a concrete parking lot.
The incident was caught on the store's surveillance cameras.

Video of it shows Harrison cradling her son in one arm and approaching the other woman as they stand next to a car in the parking lot.

The other woman then swung a shopping bag full of goods to hit Harrison in the face.

She lost her balance and her grip on the baby then fought back, dropping him.
As they scrapped in the parking lot, several others ran over. A stranger picked up the baby boy, who they'd left lying on the ground, to fight.

Harrison waited a day to take him to the hospital then, when she did, police say she lied about how he'd become injured, claiming that he fell and was being looked after by a relative.

He later died. The results of his autopsy have not yet been released.

Now his mother and Carneata Clark, a 26-year-old family friend who also allegedly lied about how he'd hurt himself, have been charged.
A spokesman for the Moultrie Police Department condemned both women, telling ABC: 'It's very disturbing tat two adults would fight in a public place while holding a three-month-old child in their arms.'

The woman who his mother was fighting with outside the store has not been arrested or named.

The case echoes that of a pregnant mother who was threatened with manslaughter charges after being shot in the stomach while five months pregnant.

That woman was never indicted.

It remains unclear what Harrison and the other woman were fighting about in the parking lot and if they were known to each other.

Police say that while no one else has been charged yet, their investigation is ongoing.
Watch the video below:
***
Source: Daily Mail UK
Top Stories