Another farmer said that his 35-hectares farmland and other crop that were planted in low-land areas, were also submerged by water. 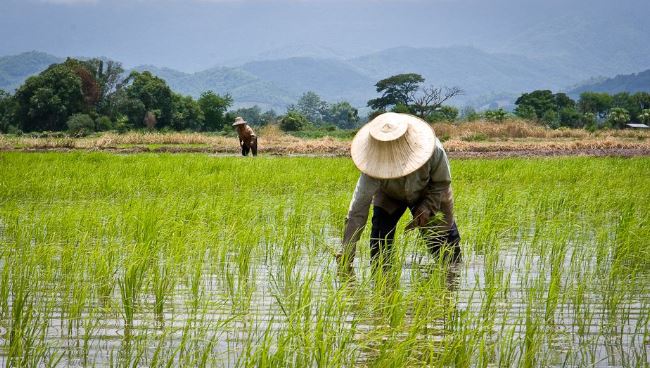 Rice farmers in Borno State on Tuesday expressed concern as hectares of rice fields were submerged by excess water released from the Alao Dam located in Borno.
Some of the affected farmers at Zabalmari rice plantation in Jere Local Government Area of the state told the News Agency of Nigeria (NAN), that they were counting their losses and trying to come to terms with their situation.
The farmers, therefore, called on the state Ministry of Water Resources to suspend the release of excess water, to enable them salvage what was left and guard against further losses.
Alhaji Abubakar Umar, a rice grower, said that he had planted his 30-hectares farmland in the past two weeks, lamenting that water from the river submerged the fields, making it difficult for the seeds to germinate.
Umar said he had spent so much on farm clearance, tillage and planting this cropping season.
“My entire farm and adjourning farmlands have been submerged by water, following released of excess water from the Aloa Dam.
“We had witnessed dry spell for some days after planting and it delayed the germinating process.
“We are apprehension of losing our investment because the seeds could not germinate in a flooded field,” Umar lamented.
Another farmer, Sama’ila Abdulmumini said that his 35-hectares farmland and other crop that were planted in low-land areas, were also submerged by water.
Abdulmimini added that the development had forced them to relocate and plant in lands of higher altitude in distant areas at the risk of being attacked by insurgents in those areas.
“When the seeds fully germinate, it will survive to maturity and yield in the water, but they wilted in excess water,” he said.
Alhaji Hassan Muhammad, Chairman of Rice Processors and Sellers Association in Jere, called on the authorities at all levels of government, to assist the affected farmers, just as he urged the ministry to avoid indiscriminate release of water from the dam.
He also urged government to enhance the distribution of fertiliser and other farm inputs to farmers to boost food production and achieve national food insecurity.
According to him, the timely distribution of fertiliser to farmers will not only boost food production through increased activities, but also enhance revenue generation for both government and individuals.
NAN reports that statistics from the National Bureau of Statistics (NBS) indicated that contribution of the agriculture sector to national Gross Domestic Product (GDP) from 1960 to 1970 was 55.8 per cent.
It however indicated that from 2007 to 2017, the GDP had dropped to 24.7 per cent.
Top Stories