Horror! Boxer Dies After Being Knocked Out In The Ring (Photo)


A Russian boxer has paid with his life after getting out-punched in the ring by an opponent. 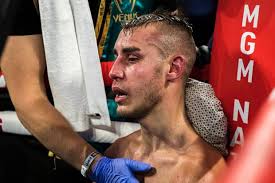 Maxim Dadashev
Russian boxer Maxim Dadashev has died after suffering head injuries during a fight last week, TASS news agency reported on Tuesday.
The 28-year-old sustained the injuries in a fight in the United States against Subriel Matias.
“It’s very sad. There are no words,” Russian Boxing Federation President Umar Kremlev told Sport Express media outlet, adding it the federation would probe the circumstances surrounding Dadashev’s death.
The Russian Boxing Federation has said it would pay for Dadashev’s funeral and compensate his family.
-Reuters
Top Stories