Parents have lamented the loss of their daughter to genital mutilation in a community in Rivers state. 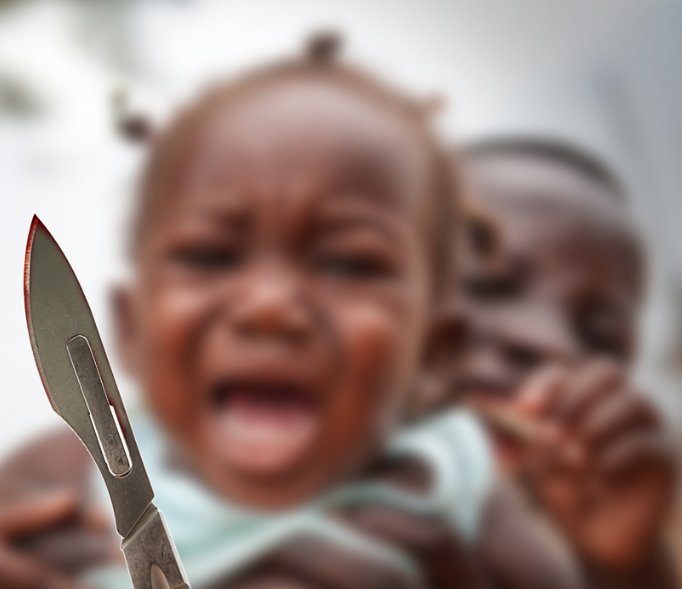 File photo used only to illustrate the story
According to a report by Sun News, a parent of a victim of the Female Genital Mutilation (FGM), Mr. And Mrs. Ebitare Okafor, have recounted their ordeal after after losing one of their children, Chineye, to what they described as untreated wounds she suffered from female circumcision carried out on her by natives of Rumukurushi village in Port Harcourt Rivers State, with crude tools.

Three-year old Chineye, according to her parent, had been battling ill health as a result of infection from untreated wounds sustained in the course of her circumcision.

Her mother, Mrs. Okafor, a petty trader, fron Omagwa in Ikwerre Local Government Area of Rivers State, couldn’t hold back tears while recounting how pressures from family members and village people from the community, made them allow Chineye to go through FGM.

Joined by her husband, Mr. Chibuzor Okafor, a native of Amaokwu in Ideato North Local Government Area of Imo State, the couple claimed to yielded to pressure from family members to circumcise their daughter at early age.

Okafor, a father of two who said he had earlier lost a son was full of tears and regret.

From his story, it is believed that the child must have been circumcised using a method of infibulation. Infibulation is a total scrapping of the clitoris, labia manora and labia minora. This process comes with pain, bleeding, stress and highly prone to infection.

Late Chineye and her parent have been victims of Harmful Traditional Practices (HTPs), commonly in African societies; it often results in premature death of girls and women, as well as leave many physically, medically, psychologically and emotionally damaged for life.

According to experts who advocate against the harmful cultural practice, FGM is recognised internationally as a violation of the human rights of girls and women. According to the UN, FGM is performed for a number of reasons, including promoting virginity before marriage. But it can cause severe bleeding and health issues including infections and infertility, as well as complications in childbirth and increased risk of new-born deaths.

A 2017 report by the UN Population Fund estimates that one in four women and girls between the ages of 15 and 49 have undergone FGM in Nigeria. The report says that the practice has reached alarming rates in six Nigerian states. Majority of the initiatives on FGM in Nigeria are spearheaded and funded by NGOs.
Top Stories