Horror! Woman Gets Flogged 100 Times In Public For Having Pre-marital S*x With Her Boyfriend (Photos)


A woman has been flogged as many as 100 times in a public place for having per-marital s*x with her boyfriend. 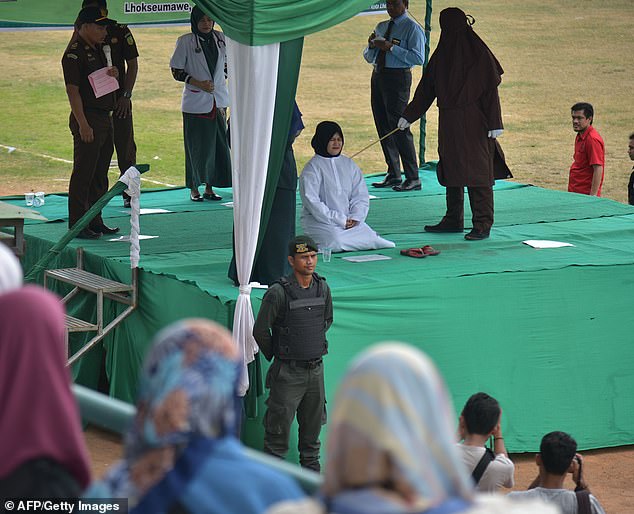 The 22-year-old woman, who was being punished for having pre-marital s*x, was among three people who were publicly whipped 100 times.

Dozens of people watched as the two men and the woman were canned in a stadium in Lhokseumawe, some 170 miles from the provincial capital Banda Aceh.

Flogging is used as punishment for a range of offences in the region at the tip of Sumatra island, including gambling, drinking alcohol, and having gay sex or relations outside of marriage.
On Wednesday, the woman and her boyfriend, who is also 22, received 100 strokes each after they were caught having pre-marital s*x.

The woman broke down several times due to the pain of the punishment, forcing the sharia officer to stop the canning until she was cleared to continue by a doctor. 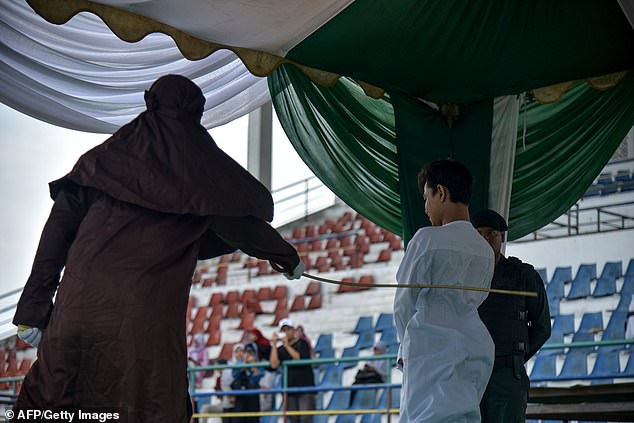 On Wednesday, a 22-year-old woman and her boyfriend, who is also 22, received 100 strokes each after they were caught having pre-marital sex.
A 19-year-old boy was also whipped with a rattan cane for having s*x with a minor.

His white shirt was soaked with blood by the end of the thrashing.

The teen will now serve five years in prison, while the couple will walk free.
Fakhrillah, an official from the local prosecutor's office, said the flogging was held inside a stadium to prevent children from watching.

Aceh is the only province in the world's biggest Muslim-majority country that imposes Islamic law.

In December, two men caught having s*x with underage girls were whipped 100 times each in Aceh.

Rights groups have slammed public caning as cruel, and Indonesia's President Joko Widodo has called for it to end, but the practice has wide support among Aceh's population.
***
Source: Daily Mail UK
Top Stories