Luck has ran out on a heartless Nigerian woman who assaulted and locked a boy inside dog cage. 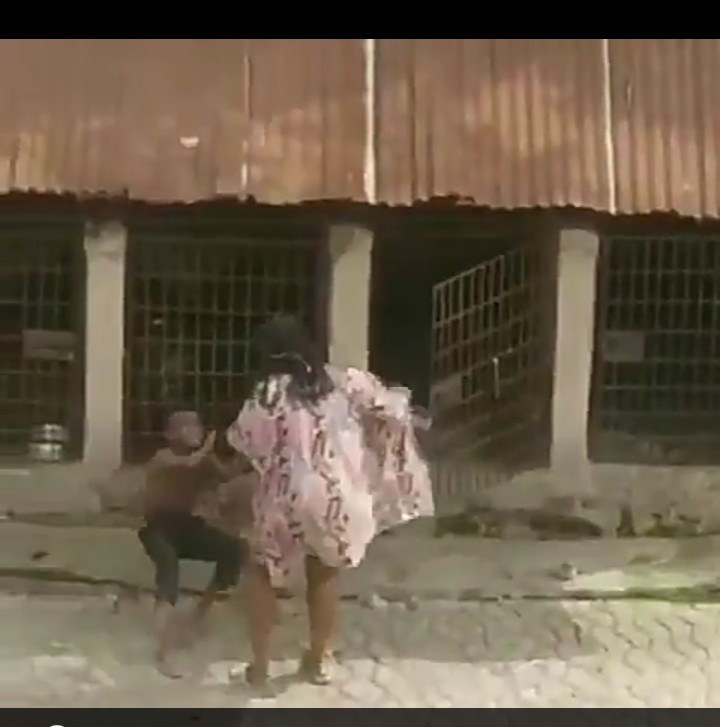 The woman locked the boy inside dog cage
A video showing a Nigerian woman flogging a boy, after which she locked him in a cage with fierce dogs, has generated outrage on Twitter and people are calling for her to be found and punished.
In the viral video, which was shared on Instagram by comedian, Gbenga Adeyinka, on Sunday, the woman could be seen flogging the boy on the back and on the head with what appeared to be a belt.
She refused to stop even as the boy pleaded for mercy. “You think I’m joking with you, ehn? You think you have power,” she asked as she flogged the boy. “Enter inside. Let me here pim,” she said as she slapped the boy a few times then kicked him into the dog cage as he tried to resist. She added: “Enter inside there.”
After locking up the boy with a large padlock, the woman walked away, presumably into the house.
Adeyinka, in his Instagram post, offered N20,000 to anyone who could provide relevant information on the woman in the video.
He said,“Good morning, I’m not sure if this video is old. I came across it today and I was shocked. I don’t think she should be allowed to get away with this. Anybody with useful information on this woman will get N20, 000 from me. This is evil.”
Social media users are calling out the woman for child abuse. They are asking for help in identifying the woman and the boy so that justice can be served.
Just like Adeyinka, many have also promised financial reward for anyone who can identify the woman.
But in an updated post, Adeyinka said that the incident happened in Nsukka, Enugu. “I’ve just been informed that this happened in Nsukka and the lady has since been arrested. Thanks for your concern; Nigeria will be great again.”
Lagos State Police Command had earlier appealed to the public to come up with information about the woman.
The police in their twitter handle – Rapid Response Squad “@rrslagos767” said “We welcome any info that can lead us to the woman. If it’s in lagos, the Command will take necessary action.”

BREAKING I'VE JUST BEEN INFORMED THAT .... THIS HAPPENED IN NSUKKA AND THE LADY HAS SINCE BEEN ARRESTED. THANKS FOR YOUR CONCERN... NIGERIA WILL BE GREAT AGAIN