In what will come across as a really shocking development, a man has shot his own brother-in-law dead in Delta. 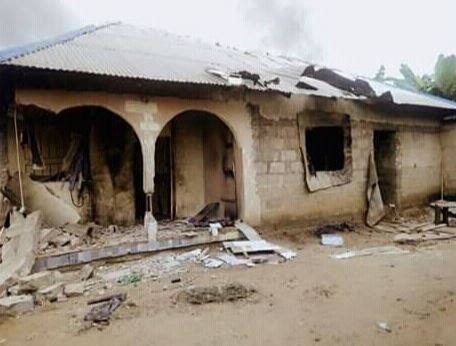 One of the burnt buildings
According to a report by Punch Metro, the residents of the NDDC Road in Amukpe, Sapele Local Government Area of Delta State, are mourning the alleged killing of a man identified simply as Pius by his sister’s husband over infidelity.

The fleeing suspect, whose identity is still unknown, was reported to have shot his brother-in-law following an altercation that ensued between the couple over the infidelity allegation.

It was gathered that the incident occurred on Saturday.

It was learnt that the fleeing husband shot the deceased in one of his eyes and Pius died on the spot.

Sources told Punch Metro on Sunday that the deceased was a younger brother to the man’s wife.

Trouble reportedly started when the man accused his wife of infidelity, a situation that resulted in heated argument between the couple.

In the heat of the argument, the wife reportedly left her matrimonial home to her mother’s place.

While the wife, whose name could not also be ascertained at the time of filing this report, was still at her mother’s home, the husband reportedly visited his mother-in-law’s place and demanded that his wife should return home with him, which caused another round of argument.

The wife’s young brother, however, objected to the demand. The incident later snowballed into an argument between the man and his in-laws.

A resident of the area, who pleaded anonymity, told our correspondent, “The man felt enraged because his wife’s younger brother insulted him over the quarrel with his wife. The man, being a hunter, returned the following morning with a gun and shot Pius in the left eye. Pius died on the spot.

“The suspect also attempted shooting the wife and her mum, but there were no more cartridges in the gun.”

As a result of the incident, youths in the area mobilised and burnt down two bungalows belonging to the suspect and his brother.

The suspect’s brother was alleged to be having an affair with the runaway wife of the man.

Sources told our correspondent that the woman denied sleeping with her husband’s brother.

They added that the suspect’s brother was wrongly accused, which led to his house being burnt down by the mob.
A police officer from the Sapele Area Command confirmed the development, saying the wife did not mention the husband’s brother as the person she was having an affair with.

Meanwhile, the Delta State Police Command said it had launched a manhunt for the fleeing man and investigation into the incident had commenced.

The state Police Commissioner, Adeyinka Adeleke, stated this on Sunday while confirming the killing of Pius to our correspondent on the telephone.

“We’re aware of the case. We haven’t been able to arrest the suspect, but we have launched a manhunt for him. He’s on the run. We are investigating the incident. It’s when the prime suspect is arrested that we can get the details of what made him kill his wife’s brother,” he said.
Top Stories