The Presidency has accused Nobel Laureate, Wole Soyinka of blackmail following his comments on Sowore's arrest. 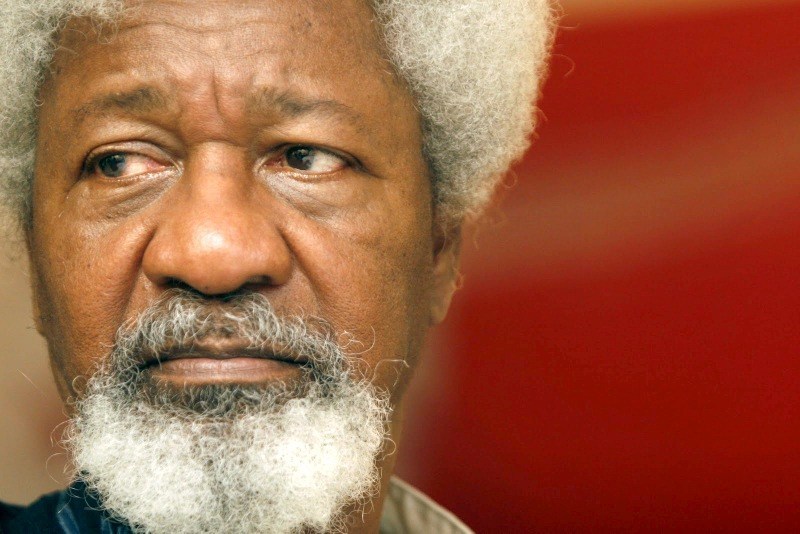 Wole Soyinka
According to a report by Premium Times, the presidency on Sunday accused Nobel Laureate Wole Soyinka of blackmail for condemning the arrest of an activist, Omoyele Sowore.

Mr Sowore was arrested on Saturday by armed officials of the State Security Service, SSS, for calling for a revolutionary protest.

Mr Soyinka had condemned the arrest of Mr Sowore who is accused of calling for a revolution against bad governance.

“Beyond the word ‘revolution, another much mis-used and misunderstood word, nothing that Sowore has uttered, written, or advocated suggests that he is embarking on, or urging the public to engage in a forceful overthrow of government,” Mr Soyinka said.

He compared the actions of the security agencies that arrested Mr Sowore to what happened during the tenure of the late dictator, Sani Abacha.

“We underwent identical cynical contrivances under the late, unlamented Sani Abacha, when he sent storm-troopers to disrupt a planning session for a similar across-nation march at Tai Solarin School, Ikenne,” Mr Soyinka wrote in a statement sent to PREMIUM TIMES.

In its reaction, the presidency through Mr Buhari’s spokesperson, Garba Shehu, said Mr Soyinka and others who have condemned Mr Sowore’s arrest are blackmailers.

“You mentioned the name of Professor Wole Soyinka. Some of these critics of government are people whom we have great respect and admiration for. When things are going wrongly with law and order in the country, they say the Police are not doing their work. They raise their voices, asking that “the culprits to be booked and expeditiously punished in the most severe manner.”

“The police under a new leadership is now rising to the occasion, saying “we cannot take any more atrocities against the law in our country and they are saying don’t do anything. They are calling out President Buhari and comparing him to autocratic leaders.” This is an unpardonable blackmail that cannot stop Police and other law enforcement agencies from doing their work,” Mr Shehu wrote.

The presidential aide then alleged that Mr Sowore’s revolution call was a call for violent change of government.

“A Nigerian is by right empowered to call for a change of government using constitutional means; to protest peacefully against government policies and decisions. But to call for the violent overthrow of a democratically elected government and president and worse – were those calling for it to attempt to do so – is not acceptable under any law in Nigeria. Violence will ever be accepted again as a way to change governments in this country. Those days are gone.

“Nigeria has a well-crafted Constitution and elaborate laws governing elections that guide an orderly succession in government. We have a judicial system that actively serves as a watchdog of the people’s rights.

“Yet, we are daily witnesses to obscene display of delight in the killing of our soldiers and policemen, an open contempt for the country’s laws and its people, accompanied by loud cheers from the so-called New Media. Is this the way to grow a country?” Mr Shehu wrote.
A few hours earlier, Mr Shehu released another statement, wherein he restated the presidency’s stance.

Following calls circulating on social and digital media, an organisation that calls itself the “Global Coalition for Security and Democracy in Nigeria” plans a “revolution” march tomorrow, Monday 5th August, with the aim of bringing “regime change” in Nigeria without recourse to a nationwide vote.

The President of Nigeria and his administration respect and uphold the right of every Nigerian to peaceful protest and civil campaign– whether to raise awareness on issues, and even oppose the government. It is the inalienable right of all citizens of the Federal Republic of Nigeria to do so.

There is, however, a difference between peaceful call to protest and incitement for a revolution.

The organisation championing this planned action is not fronted by any serious public faces. We call on the sponsors and organisers to have the decency to come forward and make their identity known – out of respect to all Nigerians – so that Nigerians can be fully aware in whose name this “revolution” is being proposed and who the beneficiaries may be.

Less than six months ago, Nigeria held simultaneous presidential and parliamentary elections. Both contests were won resoundingly by President Muhammadu Buhari and his All-Progressives Congress party. The campaign was observed, and results were confirmed by international election monitoring groups and observers. The result was even contested by the losing presidential candidate and his party in Court.

The ballot box is the only constitutional means of changing government and a president in Nigeria. The days of coups and revolutions are over.

Those making the “revolution’’ call hide behind the veil of social media modernity. But without revealing the identity of their sponsors this shadowy campaign is no better, and no more democratic, than the days of old.

The President calls on all those who seek to use and hide behind everyday citizens to attain power through undemocratic and violent means, which has been alluded, to come out clearly and be identified. They should lead their march in person. Only then will they begin to have the right to call themselves leaders before the people of Nigeria.
Top Stories