Luck has ran out on a notorious bandit after he was caught with the help of CCTV camera. 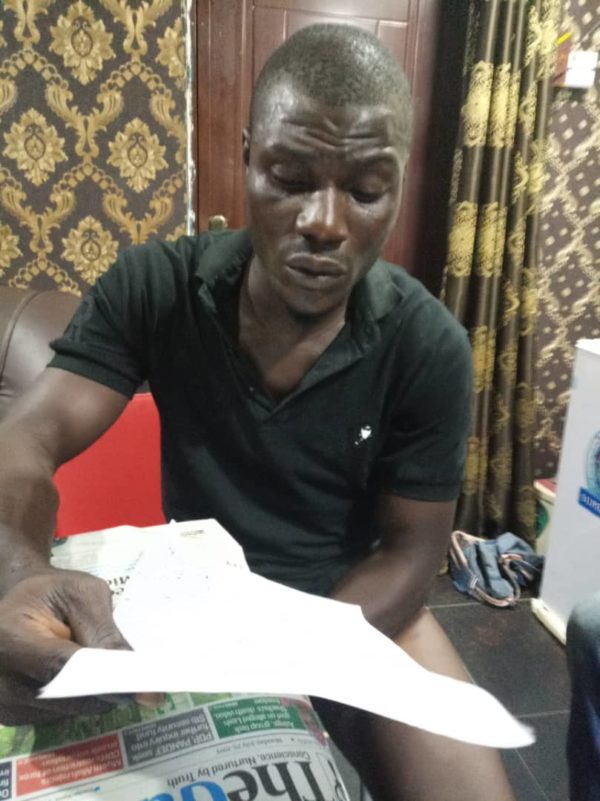 The notorious bandit
A 25-year old wanted and notorious leader of bandits, Ismaila Rasaq, a.k.a Odia, has been arrested after he was identified by CCTV camera mounted where he went for a robbery operation in Iba area of Lagos, according to PM Express.
It was gathered that Odia identified himself and told the Police that he was actually the one with a short gun during the operation and equally confirmed that he was both a cultist and an armed robber.
This was disclosed by the Police Public Relations Officer, DSP Bala Elkana. He said that on 28th July, 2019, the Police intelligence officers and operatives from Ilemba Police Station led by the Divisional Police Officer, CSP Kazeem Abonde, arrested Ismailia Rasaq a.k.a Odia of No. 27 Alubatika House, Ajangbadi, Lagos.
Elkana said the suspect is the leader a notorious armed robbery gang responsible for robbery attacks within Iba, Okokomaiko, Ojo and Ajangbadi operating with motorcycles.
They operated mostly in restaurants, bars and ware shops.
DSP Elkana said that the suspect was the number two in the hierarchy of the leaders of Eiye Confraternity ravaging Abraham Adesanya College of Education at Ijanikin and its environs and had participated in the killing a member of the rival group at Ojo area this year in retaliation of the killing of their member.
The suspect, Odia, stated that his cult group mostly used guns and axes in killing their victims. He confessed to have participated in the robbery operation of a Naija Bet shop at Iba on 11th June, 2019, at 2146hrs, alongside three other gang members where they dispossessed them of their mobile phones and money at gun point.
The CCTV footage played to him buttressed his statement as he confirmed that he was the one in the video holding a locally made short gun. He equally confirmed that his gang members were killed by FSARS operatives during a shootout in another robbery operation at Iba.
Elkana said that the suspect had been on the wanted list of the Police and the Lagos State Commissioner of Police, CP Zubairu Muazu, has ordered FSARS to take over the investigation and prosecution of the suspect.
Top Stories