The Nigerian Government has declared the 12th and 13th of August as Public Holidays to mark the 2019 Eid-il-Kabir celebrations. 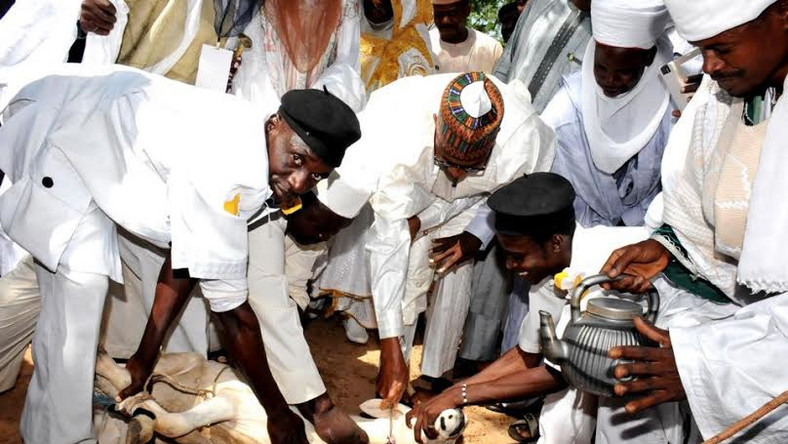 Muslim faithful killing ram for festivities
According to a Vanguard report, the Federal Government has declared Monday 12th and Tuesday 13th August as Public Holidays to mark the 2019 Eid-il-Kabir celebrations.
Permanent Secretary, Ministry of Interior, Barr. Georgina Ekeoma Ehuriah, who made the declaration on behalf of the Federal Government, congratulated the Muslim faithful on the occasion and called on all Nigerians, at home and in diaspora, “to use the period of this year’s Eid-il-Kabir celebration to embrace the virtues of love, humility, peace and sacrifice as exemplified by the Holy Prophet Mohammed (Pbuh)”.

She urged Nigerians to shun any form of disruptive tendencies and join hands with the Federal Government to build a peaceful, strong and united Nigeria so as to achieve an enviable Next Level of growth and development.
Barr. Ehuriah reaffirmed the determination of the President Muhammadu Buhari led-administration to protect the lives and properties of Nigerians, adding that Security Agencies under the Ministry have been directed to ensure the provision of adequate security, before, during and after the the Eid-il-Kabir celebrations.
The Permanent Secretary restated Government’s desire for all Nigerians to live a life of sacrifice, charity and love for one another and wished Nigerians a happy, peaceful and fulfilling Eid-il-Kabir celebrations.
Top Stories