BBNaija: 'Pray For Frodd' - Fans React As Esther Makes A Move On Him (Video)


Esther has poured out her heart during the act of kindness challenge as she spoke to Frodd.

Esther and Frodd
Esther has expressed her intentions towards Frodd during the 'act of kindness' challenged given to them by Biggie.
It was all fun in the Big Brother Naija house and obviously a moment of truth for Mercy, as she advised Frodd to get what he wants at all cost.
Recall that Biggie gave the housemates ”acts of kindness” task of Tuesday, as they were made to show kindness to another through various means for a minimum of 10 minutes.
When it was Esther’s turn, she picked Frodd and the task asked her to give him some encouragements.
During the process of carrying out the task, Esther advised Frodd to fight for whatever he wants and not give up.
It however, appears that Esther stylishly told Frodd not to give up on her yet, since her lover, Nelson have been evicted.
Recall that Frodd had nursed and expressed his feelings for Esther, but she declined on the grounds that she was in a romantic relationship with Nelson.
To the surprise of many, the “Acts of kindness” task instructed by Big Brother has helped to settle the rift between the duo.
Watch video below: 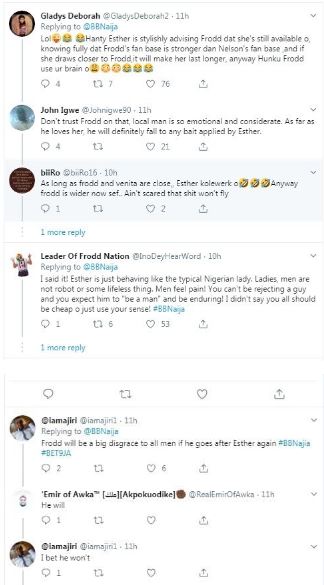 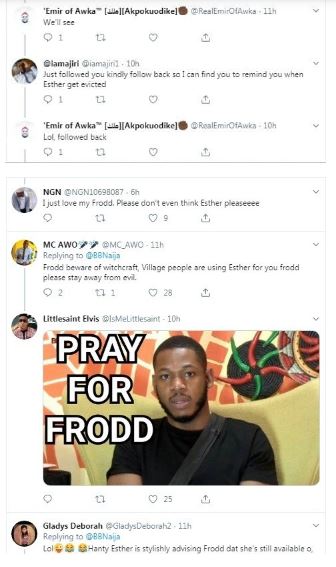