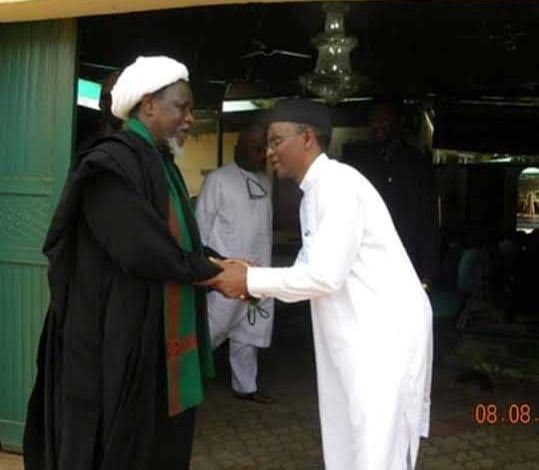 Sheikh Ibraheem El Zakzaky and Kaduna state Governor, Nasir El-Rufai
The Kaduna state government has given conditions that must be fulfilled before it will allow the leader of the Islamic Movement in Nigeria, Sheikh Ibraheem El Zakzaky and his wife, Zeenat to travel to India for medical treatment.
In a statement issued in Kaduna Wednesday evening,the state commissioner for Internal Security and Home Affairs, Samuel Aruwan said though the state government will appeal the ruling of the Kaduna high court ruling allowing El Zakzaky to travel to India for treatment, it will not seek a stay of execution because it believes that people should have access to treatment.
Kaduna state government is prosecuting El Zakzaky and his wife on an eight-count charge, including culpable homicide punishable with death.
THE TEXT OF THE STATEMENT
Kaduna State Government Statement on the El-Zakzaky Trial
Malam Ibrahim El-Zakzaky is facing criminal trial before the Kaduna High Court on charges filed in April 2018.
The Kaduna State Government is prosecuting Malam Ibrahim El-Zakzaky on an eight-count charge, including culpable homicide punishable with death. He and his wife are the first and second defendants in The State versus Malam Ibrahim El-Zakzaky and Another (charge no. KDH/KAD/60c/2018), and his plea was taken on 2nd August 2018.
His application for bail was refused on 4th October 2018, and he has since remained in the lawful custody of the state, and not in unlawful detention as being wrongly disseminated. On Monday, 5th August 2019, the Kaduna High Court granted an application for medical leave filed by Mr. El-Zakzaky and his wife, Mrs. Zeenah Ibrahim.
The court specifically said it was granting the two defendants “leave to travel out of Nigeria for urgent medical treatment at Medanta Hospital, India, under strict supervision of the Respondent and to return to Nigeria (for continuation of trial) as soon as they are discharged from the hospital”.
The Kaduna State Government respects the right of anyone to seek treatment anywhere in the world, even for malaria or common cold, so long as they are paying for it. But in the case of persons facing trial for serious offenses, necessary safeguards are required to ensure that such persons do not become fugitives from justice or frustrate trial by claiming asylum or the status of political prisoner in the host country.
In compliance with the court ruling, the Kaduna State Government has filed at the Kaduna High Court terms for strict supervision of the medical leave, as follows:
1. The Ministry of Foreign Affairs of the Federal Republic of Nigeria shall confirm the appointments of the defendants/applicants with the Medanta Hospital, India, and undertake all necessary diplomatic arrangements and protocols to ensure compliance with the conditions of the medical leave.
2. Each of the defendants/applicants shall undertake to return to Nigeria to continue their trial as soon as they are discharged from the hospital, and shall also be responsible for the cost of their travel, treatment and living expenses while on their medical leave.
3. Each of the defendants/applicants shall produce two prominent and reliable persons as sureties, one being a first-class chief/emir of national repute and the other a prominent person within Kaduna State who shall undertake to produce the defendants whenever they are needed. The sureties must also produce evidence of landed property within Kaduna State.
4. The Federal Government of Nigeria shall obtain from the Government of India an irrevocable guarantee that it will not entertain any application by the defendants/applicants or any third party seeking asylum under any guise or conferring the status of political prisoners or any other status aside from being medical patients on the defendants/applicants and shall also restrain the defendants/applicants from any act inimical to the corporate existence of Nigeria.
5. Each of the defendants/applicants shall undertake in writing, endorsed by their Counsel, that while on medical treatment in India, they shall do nothing to jeopardize the ongoing trial, the peace and security of Nigeria and the laws of the Republic of India in whatever form.
6. Security agents of the Federal Government of Nigeria shall escort the defendants/applicants and remain with them throughout the duration of their treatment in India and thereafter shall return with them after their discharge from the hospital.
7. The Nigerian High Commission in India shall undertake prior vetting and grant consent before any visitor has access to the defendants/applicants while in the Republic of India.
As is readily evident from the above, many of these terms of supervision depend for their actualization on actions by the Federal Government of Nigeria which is the sovereign power vested with the constitutional responsibility for foreign affairs.
While the Kaduna State Government respects the court’s ruling on medical leave, it disagrees with the premises on which it is based. Therefore, an appeal will be lodged on the matter, but a stay of execution will not be sought as the state government believes that a person may choose to travel abroad for any medical condition at his own cost.
As stated earlier, El-Zakzaky and his wife are defendants in a criminal case. Given the pendency of this case, the proper thing is to await its conclusion. However, the Kaduna State Government notes that perceptions of this case are suffused in a veritable avalanche of deliberate falsehood, disinformation and revisionism, powered by vested interests.
Source: Vanguard
Top Stories