A young man has landed in police net after a prostitute he slept with over the night lost her life in the process. 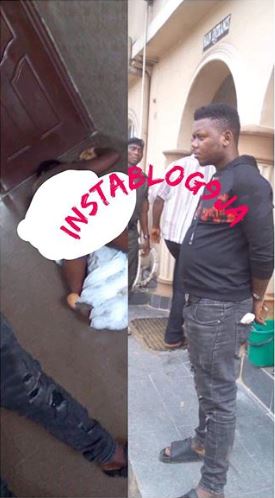 The accused and the lady's corpse
A hotel lodger has been arrested over the death of a hooker he had a romp with overnight in a hotel at Amukpe, Sapele, Delta State.
The duo had checked in after enjoying some drinks together, however, when they were about to checkout, this morning, the lady was discovered to have died and the man was promptly handed over to the police.
Investigations are underway to ascertain the circumstances under which the s*x worker passed away. In recent times, most young men have been taking s*x enhancers to enable them last longer in bed, and satisfy or impress their women.
The social media space has become a hotspot for the advertisement of drugs and herbs that energize young men during s*x.
Top Stories