Discussions at the meeting bordered on the security situation in the country including banditry, kidnapping and armed robbery. 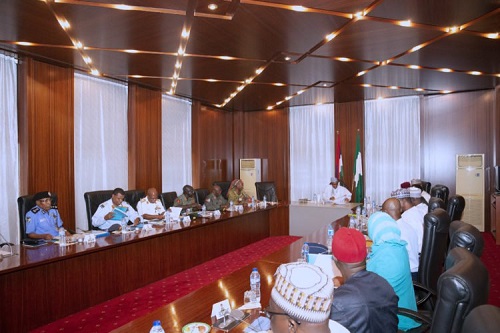 President Buhari Meets With Security Chiefs, Others Over Taraba Killings

Discussions at the meeting dwelled on the killings in Taraba State and general security situation in the country.

On the 6th of August 2019, troops of 93 Battalion Nigerian Army Takum had pursued and exchanged fire with some suspected kidnappers, who turned out to be an Intelligence Response Team from the Police Force Headquarters Abuja on a covert assignment from Abuja resulting in the death and injury of some members of the Team.

Those at the meeting with the President included Chief of Defence Staff, General Gabriel Olonishakin, Chief of Naval Staff, Ibok-Ete IIbas, and Chief of Air Staff, Air Marshal Sadique Abubakar.

Also at the meeting were the Chief of Army Staff, Lt. Gen. Yusuf Buratai and the representative of the Inspector General of Police, Mohammed Adamu. 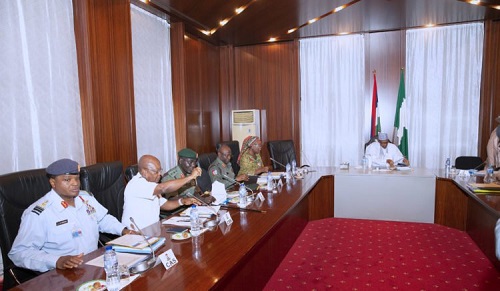 Briefing State House correspondents at the end of the meeting, Air Marshal Sadique Abubakar said that the council evaluated the current strategy of managing internal security operations all over the country.

Stressing that the meeting was satisfied with the current efforts being taken, he said that substantial progress are being made in all the areas of conflicts.

“Finally, we also want to assure Nigerians that the armed forces of Nigeria and other security agencies would continue to work to ensure the security of Nigerian and to also ensure that no individual or group of individuals undermine the territorial integrity of Nigeria. That, in a nutshell, is the outcome of this meeting. “ 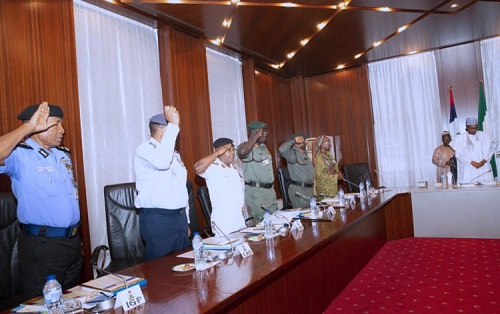 Asked if the council discussed the issue of using technology and drones to fight crimes as earlier pledged to the south-west leaders, he said, ”Technology will continue to play a very critical role in resolving security challenges in Nigeria.

“All the services are using one technology or the other in order to ensure that our country is secured.

“So security will continue to play a role and we are also looking at other areas of technology that are not currently in use to ensure that we put together all that is required to ensure the security of Nigerian and Nigerians."
Top Stories