A woman of Nigerian descent who engages in trafficking young girls in Ghana has been arrested by authorities in the country. 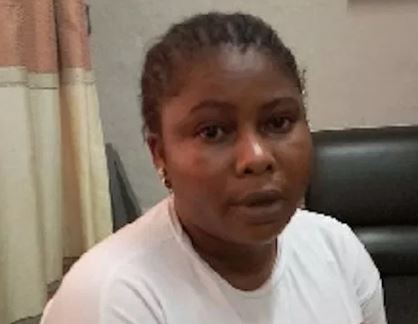 Abaraonye, 31, is said to have been engaged in the business of trafficking young Nigerian girls to Ghana for prostitution, on the pretence that they were coming to work as sales girls in Ghana.

According to Ghanaweb.com, one of the two ladies she brought in, along with her Ghanaian boyfriend escaped from her clutches and reported her to the police in Tamale. Her boyfriend is now on the run.

According to the report, Abaraonye brought the girls, aged 23 and 26 into Ghana through the Aflao border.

One of the victims, not yet identified, told journalists that when they arrived Ghana , they were transported to Tamale where reality dawn on them that they were not brought to Tamale as sales girls but to work as prostitutes.

She revealed that the suspect and her Ghanaian boyfriend took their hair, part of their nails and forced them to take an oath indicating that they would not reveal their activities to any authority, else they would die.

‘They said they are keeping the hair and nails and if we run , they will make us run mad’.

She said they were made to sleep with men daily and account to their madam at the end of the day.

The victim said she was tired with the maltreatment by the suspect and her boyfriend and wanted to go back to Nigeria.

” I came to report the case because I want to go back to Nigeria, I can’t use my body to make money for somebody and I want her to return my phone and the hair, nails she took from me,“ she said.

The Assistant Commissioner of Immigration Northern Region, E. Kofi Owusu, told journalists that the victims were forced to engage in the prostitution in order to repay their madam for the expenses she claimed to have incurred in bring them into Ghana.

Each of the girls were expected to pay back an amount GH¢ 8000 as expenses.

He indicated that the two victims have been transported to Ghana Immigration Headquarters in Accra whiles the suspect is on admission at the Tamale Teaching Hospital where she is said to be recuperating from a relapse after undergoing an abortion a day earlier to her arrest.

The suspect is expected to be transported to Accra after she is discharged.
Top Stories