Prices Of Pepper, Ram Rise Ahead Of Sallah Celebration


Seasonal price fluctuation and scarcity due to the high patronage for the celebration slated for Sunday were the causes of the high cost of the fresh foods. 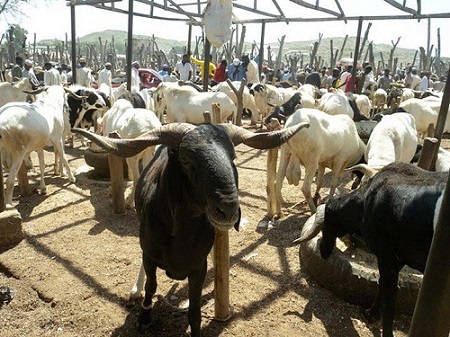 The prices of perishable food items and ram in major markets of Obafemi Owode Local Government in Ogun State increased significantly amidst preparations for Eid-El-Kabir celebration.

A visit by The Punch correspondents to Mowe, Ibafo and Kara markets in the state indicated that there was a significant increment in the prices of tomatoes, rice, pepper, ram and cattle.

However, it was observed that the prices of a few food items had been stable in the past one month.

The traders who spoke to our correspondents stated that two factors were responsible for the hike in prices of perishable goods such as fresh tomatoes, fresh pepper, and vegetables.

According to them, seasonal price fluctuation and scarcity due to the high patronage for the celebration slated for Sunday were the causes of the high cost of the fresh foods.

A fresh tomato and pepper seller in Mowe market, Amaka Chukwudi, complained of how the increase in these goods affected her business, saying red bell pepper (tatase) rose by 160 per cent and cayenne pepper (shombo) increased by 50 per cent.

According to her, the prices of fresh tomatoes and pepper have never been stable during this period as they rise and fall. She added that she observed a scarcity of fresh pepper in the wholesale market on Thursday and she had to return without buying any pepper.

It was observed that the prices of rice and red oil had changed slightly but the few items whose prices remained the same were groundnut oil, beans, yam, and groundnut.

Ram, a major livestock that is significant to the Eid-el-Fitr celebration also flooded the market as sellers waited for buyers.

Our correspondent, during a visit to Kara, a major ram market in Ogun State, observed ram and cow sellers hurdled in groups with only a few buyers bargaining with them.

A ram seller from Kano State, Musa Abdullahi, said that he brought the animals to Lagos border town with the hope that he would get better patronage than from the north but added that the pace of sale was the same.

He explained that the cost of transportation and feeding had  contributed to the increased price this year as the smallest ram last year was sold for N30,000.
Top Stories