There is mayhem in Ijegun area of Lagos State, Southwest Nigeria on Saturday as a mob beats a policeman to death for killing a tailor in her shop. 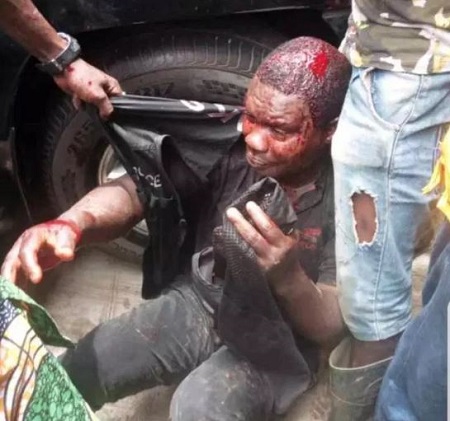 The Lagos State Police Public Relations Officer, Bala Elkana, has said a policeman has been killed and two others injured in the Ijegun incident.

The PUNCH had earlier reported that some operatives of the Special Anti-Robbery Squad have gunned down a shop owner, identified as Biliki, in the Ijegun area of Lagos following which a mob seized one of the policemen and insisted that he must be lynched.

The operatives reportedly opened fire on the suspect and one of the bullets hit Biliki, who was in her shop.

“The woman was rushed to hospital where she died. We have taken one of the men. He has been beaten and we want you to come down to see things for yourself,” a resident said.

Our correspondent learnt that the mobbed policeman had been taken to the palace of the traditional ruler in Ijegun, where a crowd of angry youths have requested to lynch him.

Elkana clarified that the officers involved were Anti-Kidnapping operatives and not men of the Special Anti-Robbery Squad.

He added that there was still tension in the area as a police team had been deployed in the area to restore sanity.

He said, “They were Anti-Kidnap, not SARS operatives. We don’t have the details of what happened for now. But the mob has killed one policeman and injured two. The area is still tense. But we are handling it.”

Biliki, a tailor, was reported to be pregnant when she was killed.
Top Stories