Revealed: Nine Months After Inauguration, Osun Governor Is Yet To Appoint Commissioners


The governor of Osun state is yet to appoint any commissioners some nine months after he was sworn in as governor. 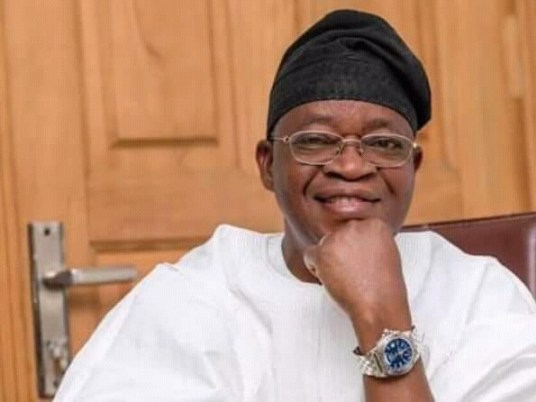 Nine months after Gboyega Oyetola was sworn in as the governor of Osun State, he has refused to constitute his executive council. Rather than appoint commissioners, Mr Oyetola is running selected ministries with supervisors.

It appears that his administration is following the antecedent of the former governor, Rauf Aregbesola, who during his second term in office refused to appoint commissioners for more than a year due to what he tagged financial constraints.

While the constitution provides for the appointment of commissioners, Mr Oyetola simply used his discretion to appoint supervisors for some ministries he considers very important.

Seven supervisors have been appointed to do the work of commissioners over the ministries of works, finance, agriculture, home affairs, education and information.

“The governor has simply shown that he can manage the affairs of the state with his discretion. While the Constitution provided for the appointment of commissioners he has refused to do so. This, he may not consider key to his government.”

“Appointment of supervisors for some ministries is not even approved by the law. You don’t edit the provision of the law. The law says commissioner not ministries supervisors nor supervising commissioners. If the seven ministries are the only ministries considered key to running a government, then we should scrap others,” Mr Orioye said.

A source at the Government House told our correspondent that the delay was due to two basic reasons: first be sure that the governor will not be sacked by the court following the decision of the major opposition candidate, Ademola Adeleke, to contest the election results and secondly to make sure the presidential election was held before appointing commissioners to avoid any division that may occur from the selection.

Our source who pleaded anonymity because he is not permitted speak with the media said: “By the time his Excellency was inaugurated, it was not certain that we will remain in government. In fact, there was high tension after the tribunal upturned the election. Appointment of commissioners at that critical points cannot be done. We need to be sure that all is well before nominating commissioners. The focus of the government then was simply how to remain in office”.

“Also, don’t forget that the appointment of executive cabinets also comes with interest. It was important for the state to wait for presidential and other general election to hold before making any appointment. The party will lose out some persons who may feel that they are not duly represented in the governor’s appointment. But now that we don’t have any election coming soon, if appointment is made and some people are not pleased, we would have mend fences before the next election”.

The Supreme Court on July 5 dismissed Mr Adeleke’s case and affirmed Mr Oyetola Osun governor. Also, the presidential election was held over five months ago. Therefore, both can no longer be considered impediments to the appointment of commissioners.

Several calls and text messages put across to Adelani Baderinwa, the supervisor of the ministry of information, on the topic, has not been responded to for over a week.

Ismail Omipidan, Mr Oyetola’s spokesperson, also did not respond to calls and text messages on the matter.

Kunle Oyatomi, the APC spokesperson in Osun, requested a text message be sent on Monday. He did not reply to the message and did not pick subsequent calls.

An Osun-based lawyer, Ibiyemi Aina, compared Mr Oyetola’s inaction to that of President Muhammadu Buhari.
“Just like the way it took Buhari several months to make appointment, Oyetola is doing the same. We can’t condemn the president for failure to appoint cabinet members and watch the governors”, he said. “Some ministries that the governor abandoned are very important. For instance, you can’t have an administration without the ministry of justice. But, this ministry was not even considered as key to the governor likewise other relevant ministries.”

In its reaction, a socio-political group, Osun Transformation Forum, condemned the refusal of Mr Oyetola to appoint commissioners nine months after he was inaugurated.

The group in a statement made available to PREMIUM TIMES on Monday said the state governor’s refusal to appoint commissioners has limited development in the state.

“We condemn the ‘I don’t care attitude’ of the government of the day to the running of the activities. Appointment should be made and not a one-man show.

“We use this medium to call on all political leaders in Osun to call on Governor Oyetola to make necessary appointment for effective running of the state,” the group said.
***
Source: PREMIUM TIMES
Top Stories