Japhet, a Mobile Police on August 9th took to his Facebook page and wrote some very controversial contents. 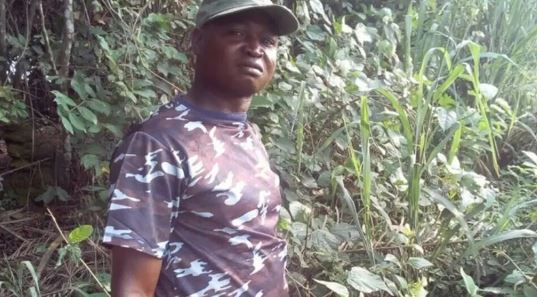 Sunday Japhet
The Yobe State Command of the Nigerian Police Force has arrested one of its personnel identified as Sunday Japhet for allegedly insulting President Muhammadu Buhari, Vice President Yemi Osinbajo and the Inspector General of Police on his Facebook page.
The State Commissioner of Police, Sunmonu Adeyemi Abdulmaliki on Wednesday, confirmed the arrest of the policeman to DAILY POST in a reply to a message send to him, saying “Yes and Transfered Him to Zone 12 HQ Bauchi”.
But, the CP did not give further details.
Japhet, a Mobile Police on August 9th took to his Facebook page and wrote:
“This is Nigeria, with a president who want to fight corruption and tackle insecurities, with the vice who claimed to be a man of God without truth, with many elected senators, with IGP that we think things will change, its a pity for them, those that lead this country, I pray that this demonstration that is going to happen on 14 /8 in Maiduguri, Yobe, Adamawa and other places that mobile police on special duty are going to hold for their allowances be the beginning of something in this great country led by evil men, we are inviting all the media to be there for us, this people call their self leaders are all aware that this money use to be in some people joint account to get interest,then after 3-4 month they pay, no one will say he don’t know what is happening that this money is not paid, God will come down himself to help Nigerian if really this is buhari handling this country this way,i better die for truth then to be, seeing nonsense”. (Sic) 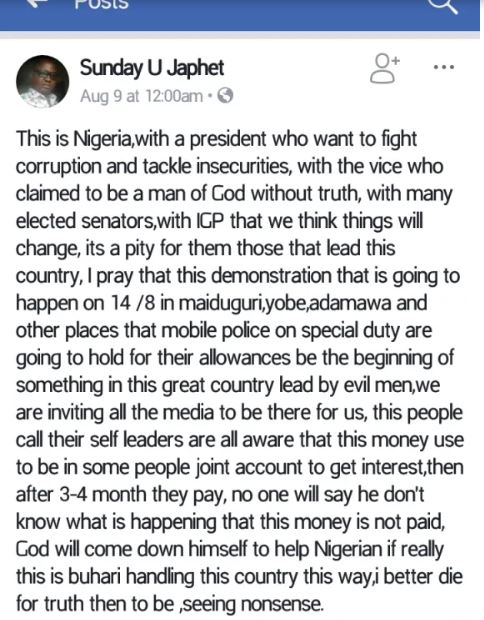