Army vs Police: Surviving Policeman Narrates How He Escaped Death After His Colleagues Were Killed By Soldiers


Details have emerged showing how a police officer narrowly escaped death after his colleagues were killed by soldier who freed a notorious kidnapper. 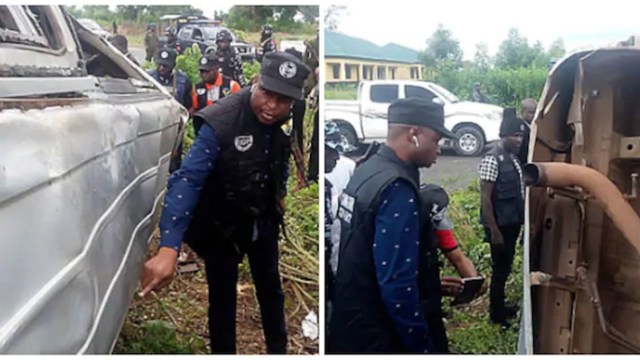 Scene where the police officers were killed by soldiers
One of the surviving operatives of the Inspector General of Police Intelligence Response Team who were attacked by soldiers of the 93 battalion in Taraba state while taking a suspected kidnap kingpin to Jalingo, has given a blow-by-blow account of how he escaped death by the whiskers.
According to Vanguard, the operative, an inspector currently nursing a gunshot wound from the attack, disclosed that one of the soldiers had suggested that he be killed so as to truncate any evidence against them.
The wounded police officer, who was moved to Abuja for treatment, said what saved him from being killed was a counter order from one of the senior officers and the presence of villagers at the scene.
He explained: “My escape from death was God’s divine intervention. We had succeeded in arresting the kidnap kingpin. His legs and hands were cuffed and we put him in our vehicle as we drove off.
“We passed the first and second check points successfully. Besides, when going, we greeted the soldiers at the check points and even offered one of them doughnut. But when we got to the third check point, we discovered that a military Hilux van was following us.
“We were not driving fast; we were even waiting for them to overtake us when all of a sudden, they opened fire on our vehicle.
“In the process, the vehicle somersaulted, a bullet hit me in the leg. But I struggled to run into the bush with some of my colleagues. From a distance, I watched how they (soldiers) killed my colleagues in execution style, even when they explained that they were policemen.
“Thereafter, one of them said they should comb the bush for those that ran inside. I crawled in pains, and tried to hide but they caught up with me. One of them said they should shoot me dead, that if they left me alive, I would speak out.
“But a lieutenant among them said they should take me to the hospital. I commend him because but for his counter order, I would have been killed as well. By then, villagers had come out and started videoing the process.
“One of them even said it would be unwise to kill me since the villagers were also videoing the scene with their phones. I also saw when the soldiers carried the arrested suspect into their Hilux van and drove off.”
Meanwhile, it has been revealed that the Army captain who allegedly ordered soldiers on a security check-point along the Ibi-Jalingo expressway in Taraba state to attack and kill police operatives had been identified.
Police investigation carried out revealed that telephone conversations between the kidnap kingpin, Alhaji Hamisu Balla, alias Wadume and the captain, were about 191 within the space of one month between July 9 and August 6.
Top Stories