Adebowale disclosed that his gang imports the arms and ammunition from North Africa through Burkina Faso, Ghana and Benin Republic to Shaki in Oyo State. 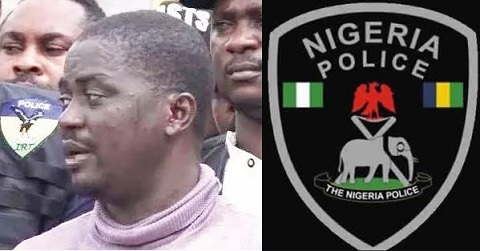 Gbenga Ojomo Adebowale
A mild-drama played out yesterday at the Abuja office of the operatives of the Inspector-General of Police Special Intelligence Response Team (IRT).

A 45-year-old suspected gunrunner, Gbenga Ojomo Adebowale, who was in detention, heard operatives discuss the killings of their men and how suspected kidnap kingpin, Alhaji Hamisu Wadume, was at the centre of the storm.

When Adebowale heard the name, something jugged his memory and he remembered that he had encountered someone with that name.

When he asked more questions from IRT operatives and checked out the pictures of Wadume, he confirmed that it was the same brazen young man he supplied six AK47 rifles and four cartons of ammunition in April in Benue State.

Adebowale, who said that it was not his business to probe clients who buy guns from him on what they needed them for, recollected that one of his partners, Moses, told him that Wadume claimed that his frequent demands for rifles and ammunition were to confront herdsmen attacking in his community.

Adebowale denied knowing that Wadume, who appeared to have disappeared into thin air, was an alleged multi-millionaire suspected kidnap kingpin.

He said: “Our arms come from Burkina Faso and Ghana. Sometimes, about four or five years ago, I went to supply goods. The connection for the supply came from Moses. He said that the final destination was Markudi in Benue State. We used to create compartment in trucks, where we concealed the arms and ammunition, making it difficult for security agents to detect.

“When we got to Benue State, Moses introduced me to four men, including Julius and Hamisu. Back then, I thought Hamisu was from Benue State. But the other men with him were Tiv. In mafia business, we don’t really interact with our customers. After that encounter, Moses and I started going to Benue State to meet Julius, to supply weapons.”

Adebowale, who was arrested sometimes in June, disclosed that his gang imports the arms and ammunition from North Africa through Burkina Faso, Ghana and Benin Republic to Shaki in Oyo State.

He said that the police seized 6,000 live ammunition from him and his gang.

Adebowale, who is married and has children, confessed that he had been in gunrunning business for 15 years and was based in Ibadan, Oyo State.

Speaking with New Telegraph yesterday, he said: “I have a contact from Onitsha called Moses. He is a partner. While I’m based in Ibadan, Moses is based in Onitsha. We used to exchange goods. If he has, he would give me, if he didn’t have, I would give him.

“In 2016, I started having problem and had to travel out of the country. I returned last year. Early this year, a private number called me, the person asked if I had heard that one of our partners, Denise, had been killed. I asked who was calling, he said Hamisu. I remembered that he was the fourth guy with us on that day in Benue State.

“Denise was also our partner there. He explained to me how Denise was killed and asked for 10 AK47 rifles. I told him that I didn’t have up to 10 rifles with me at that moment. I told him that someone promised to enter Nigeria the following day with six AK47 rifles and four boxes of ammunition. I wanted us to meet at Onitsha, but he insisted that I should come to Benue. I asked him to pay N800,000 per one and he accepted. I went to Benue in April with six AK47 rifles and four cartons of ammunition to give to him.

“I later heard that Abba Kyari and men were hunting for me. I started switching off my phones and running helter-skelter, but they eventually arrested me.”

Asked if he asked Wadume his reasons for always asking for guns and ammunition, Adebowale said that it was Denise and Moses that had the connection to Wadume and had been doing the supply. He only had to supply directly to Wadume following Denise’s death.

He added: “I didn’t want to probe too much on what Hamisu uses the guns for. He is Moses’ customer, not mine. But I heard that they were buying the guns because herdsmen were seriously troubling them. They were tired of the attacks and were ready to confront the herdsmen, hence the several guns they were stockpiling.  When they were saying this, I thought they were from Benue State. It was later I got to know that Hamisu was from Taraba State.

“I know him only as a don; I didn’t know anything other than that about him. Those of us in gunrunning business are called dons. Don simply means ‘mafia.’ When I heard about how the policemen were killed, I felt bad. I supplied Hamisu guns. At least 70 per cent of us in gunrunning business in Nigeria are graduates.”
Source: New Telegraph
Top Stories