However, the court decided there was too much conflicting evidence to determine conclusively if the three men had used the bottle to strike the victim. 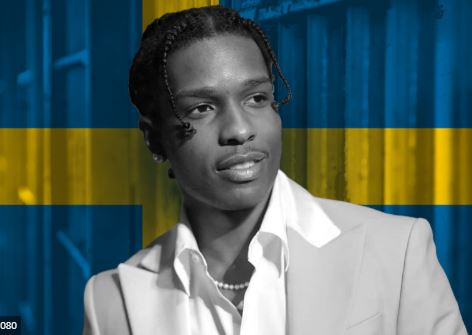 A$AP Rocky
US rapper A$AP Rocky has been found guilty of assault and handed a conditional sentence after he was involved in a street brawl in Stockholm.
The performer and two members of his entourage were convicted by a Swedish court, following a confrontation in the Swedish capital on June 30.
In its ruling on Wednesday, Stockholm District Court rejected the performer's claim that the trio had been acting in self-defense.
"Based on statements from two witnesses, the court finds that the defendants were not subject to a current or imminent criminal attack," the ruling said.
"Therefore, they were not in a situation where they were entitled to use violence in self-defense. Nor could they have perceived themselves to be in such a situation."
Swedish public prosecutor Daniel Suneson had argued during the trial that the artist and the two other men -- David Rispers and Bladimir Corniel -- assaulted the victim by kicking and beating him with a whole or part of a glass bottle while he lay on the ground.
However, the court decided there was too much conflicting evidence to determine conclusively if the three men had used the bottle to strike the victim.
A$AP Rocky's lawyer Slobodan Jovicic said his client was "of course very disappointed" during a press conference following the verdict.
The imposition of a conditional sentence means that A$AP Rocky will be subject to a probationary period of two years. The court awarded damages of 12,500 Swedish Krona ($1,300) to the victim "for violation of his integrity and pain and suffering."
The defendants were also ordered to pay fees of 80,610 Swedish Krona (nearly $8,400) for the victim's lawyer.
Known for his song "Praise the Lord," 30-year-old A$AP Rocky -- whose real name is Rakim Mayers -- was released by Swedish authorities at the conclusion of his trial on August 2 and left the country shortly afterwards.
He was not required to appear in court for Wednesday's ruling.
The rapper's arrest angered fans and fellow artists, and strained diplomatic relations with the United States after President Donald Trump repeatedly demanded his release, even raising the issue with Swedish Prime Minister Stefan Löfven.
In response, Löfven's spokesperson Mikael Lindström said in a statement to CNN at the time that "the Government is not allowed, and will not attempt, to influence the legal proceedings, which are now ongoing."
Swedish officials repeatedly stressed that the country's judiciary is "completely independent" and "does not take into consideration outside pressure from politicians or others."
A$AP Rocky addressed the case during a performance at a music festival in California on Sunday, according to Reuters.
"Hopefully we won't have to go back to jail or nothing like that, that would be crazy," he told the audience at the Real Street Festival -- his first public appearance since his release. "It was an unfortunate event and I'm just trying to stay blessed."
Top Stories