Pastor On The Run After Stealing SUV Finally Arrested (Photo)


A pastor on the run with his gang members after stealing a car has been arrested by security operatives. 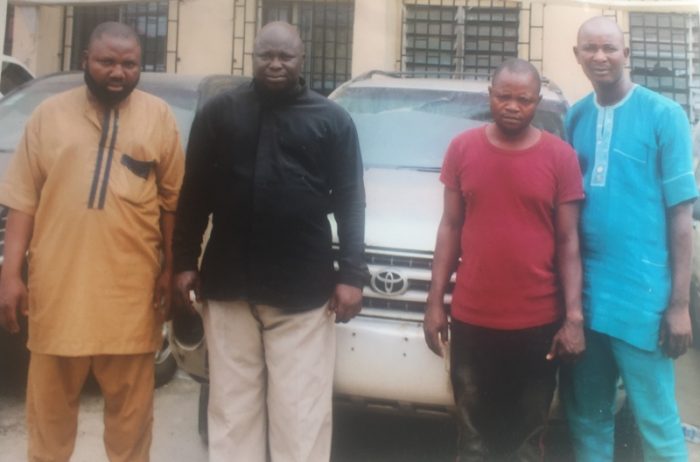 The pastor arrested with his gang members
Operatives of the Federal Special Anti-robbery Squad. FSARS, Lagos have arrested the fleeing Pastor in charge of Jesu Miracle Church, Sango-Ota, Ogun State,  Pastor Jeremiah Ehindero, 41, for allegedly stealing a Toyota High Lander valued N1.2 million from a car dealer.
He was alleged to have sold the Sports Utility Vehicle, SUV, in Ore, Ondo State for N600,000 and escaped.
Other suspects arrested with him over their involvement in the alleged crime included Lateef Oyetunde who allegedly purchased the stolen SUV from the pastors; Jamiu Abiodun, 35 and Lukman Moyoyesa, both of who allegedly introduced the buyer to the pastor.
According to the police, trouble started for the pastor when he went to the car sales outlet belonging to one Jamiu located in Sango–Ota, Ogun State to introduced himself as a pastor and that he needed a Toyota Highlander to purchase for evangelism purpose.
Police further alleged that after the car dealer and the pastor agreed on the purchasing price for the SUV, put at N1.2 million,  he trusted the pastor and allowed him to fast drive the SUV, only for the pastor to remove the number plate marked LND 816CK and drove the SUV straight to Ondo State and sold it for N600,000 and escaped.
When the car dealer waited for 24 hours without seeing the Pastor and his SUV, he reported the matter to the Deputy Commissioner of Police, DCP in charge of FSARS, Lagos, DCP Kola Okunola Kamaldeen who directed his team led by SP Olaniyi Festus to do everything possible to arrest the pastor and recover the stolen vehicle.
Following the directives, Festus and his team swung into action and tracked the stolen SUV to Ore in Ondo State and recovered the vehicle and arrested the buyer and two others at the scene.
The police also traced the Pastor to his residence in Sango-Ota in Ogun State and arrested him.
During investigation, the pastor allegedly confessed to the crime and said that the devil pushed him to commit the crime.
In his alleged confessional statement to the police, Ehindero allegedly stated: “I decided to steal the SUV and use the proceeds to settle the N650,000 I borrowed from Mirco-finance bank in Lagos.
“I borrowed the sum of N650,000 from a Micro-finance Bank to renovate my church and to recover the investment from tithes and offerings, I was surprised that for three months, no money was realized to repay the loan.
“When the pressure from the micro Finance became too unbearable for me, the devil told me to steal a vehicle from a car dealer to sell and use the proceeds to repay the loan. I regret my action Ehindero.”
The alleged buyer of the SUV, Oyetunde allegedly stated: “If I had known that the Pastor stole the SUV, I would not have purchased it.”
A police source said that all the suspects would be charged to court after conclusion of investigation.
Top Stories