A Nigerian student who went into kidnapping has explained why he went into crime after he was nabbed. 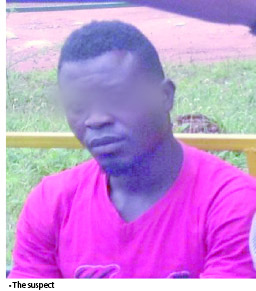 Godwin, a student of the College of Education, Obudu, Cross River State, claimed financial difficulty pushed him into the crime of kidnapping for ransom. He was among the 14 suspects paraded by the Commissioner of Police, Benue State, Mukaddas Garba, at the command headquarters, Makurdi, Sun News reports.

Confessed: “I operate alone from start to finish. All I do is to identify people in the community who are doing well financially and can pay my ransom. Then I write letters to them threatening to kidnap them if they don’t pay me within a certain period. I then ask them to drop the money in a particular location where I would go and pick it.”

Confirming Godwin’s mode of operation, two of his victims who were at the police headquarters; Pande and Nenge, said he wrote each of them and demanded that they drop specific amount of money for him at an exact time in a specific location or risk their wives and children being kidnapped.

Pande said after negotiation, he eventually paid the suspect N250,000, which he took to the particular location they both agreed upon. Nenge said he parted with N300,000 to the suspect in May, to avoid any member of his family being kidnapped.

Mukkadas said the police went on the trail of the suspect after one of his victims from Vandekiya Local Government where he usually operated reported a case of threat to life to the police. He said the victim had told the police that some unknown persons called and threatened him to pay them N2million or he would be kidnapped and killed.

The commissioner stated: “Investigation led to the arrest of one Godwin of Mbayongo Vandeikya who was arrested from his hideout at Tsav Village. The suspect confessed to the crime.”

Other suspects were also paraded for various crimes including illegal arms manufacturing, rape, cultism, child trafficking as well as armed robbery. The CP said all the suspects arrested including Godwin would soon be charged to court after completion of police investigation.

He, however, appealed to members of the public to always avail the police reliable information that could lead to the arrest of criminals in their environment stressing that such useful information would help the police rid the society of criminal elements.
Top Stories