A former Fidelity Bank staff who stole millions deposited by customers has been jailed by a court. 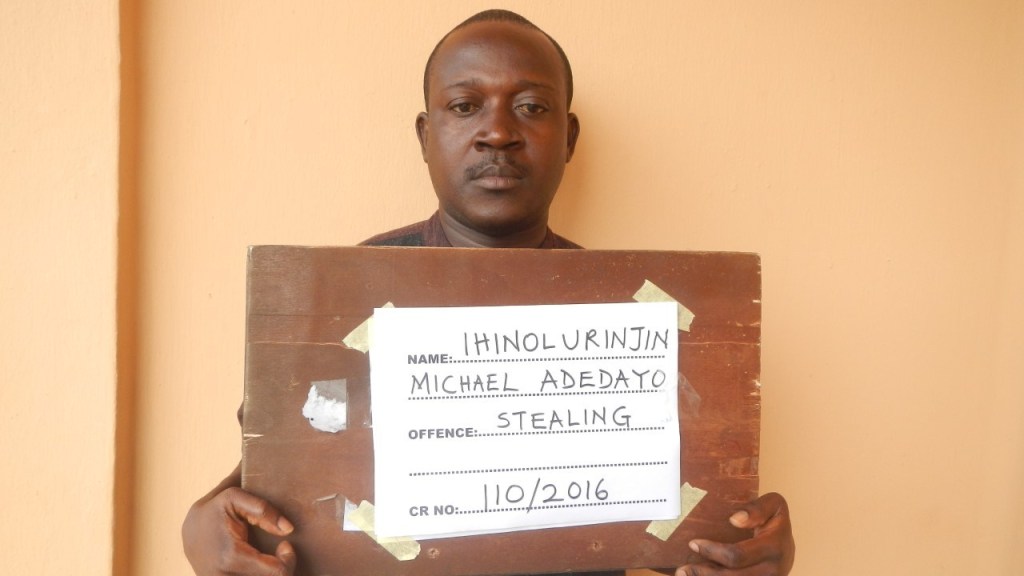 Michael Adedayo
Justice Abiodun Adesodun of the Ekiti State High Court, has convicted a former cashier officer with Fidelity Bank, Ado branch of Ado Ekiti, Michael Adedayo Ihinolurinjon, and sentenced him to ten years in prison for stealing money from the bank’s vault and diverting customers’ deposits to personal use.
Ihinolurinjon was on Thursday, August 15, 2019, found guilty of a two-count charge of stealing in a criminal case filed against him by the Economic and Financial Crimes Commission, EFCC, Ibadan zonal office.
The offence, according to the charge sheet, was contrary to Section 390 (g) of the Criminal Code Laws Cap 16, Laws of Ekiti State, 2012.
The bank had written a petition to the EFCC alleging that while still a staffer, Ihinolurinjon stole a sum of N8, 891,000.00 from its vault, and also failed to remit a total of N7, 251,600 he collected from customers to the bank’s account.
“Our preliminary review showed that Michael fraudulently diverted the sums of N8,891,000.00 and N7,251,600.00 of the branch vault and customers’ cash respectively. The cash deposit of N7, 251,600.00 received by Michael from various customers between 1/9/16 and 19/9/16 were neither posted to their respective accounts nor the cash accounted for,” the bank stated in its petitioned dated October 17, 2016.
The bank also accused Ihinolurinjon of absconding from duty ‘upon sighting one of the customers whose cash he had fraudulently diverted’.
Following the petition, the Commission went into a full scale investigation after which the accused was originally charged with obtaining through false pretence in a one-count charge filed in 2017.
The charge was later amended to a two-count, bordering on stealing, upon which he was re-arraigned on June 24, 2019.
While prosecuting the case, the EFCC, through its lawyer, Abdulresheed Lanre Suleman, called nine witnesses and also tendered several exhibits.
After listening to arguments on both sides, Justice Adesodun found the defendant guilty as charged, and sentenced him to five years imprisonment on each of the two counts. The sentencing, he held, would run concurrently.
The court, however, gave the convict an option of fine of N100, 000 on each of the counts. He was also ordered to pay a sum of N7, 000,000 as restitution to Fidelity Bank Plc, the petitioner in the case.
Top Stories