A notorious human trafficker who sells people to Arab countries as 'slaves' has been finally nabbed. 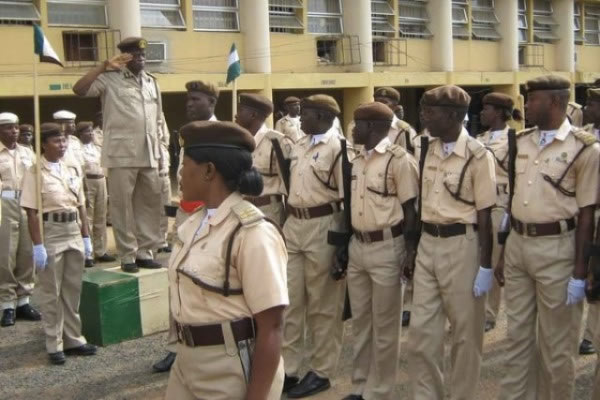 File photo: Immigration officials
The Ondo State Command of the Nigeria Immigration Service has arrested one  Oluwomise Modupe for allegedly involved in the trafficking of one Folashade Ogunfamuyide to Oman, Punch Metro reports.

Parading the suspect at the headquarters of the NIS in Akure, the state capital on Thursday, the state Commander of the NIS, Mrs. Eunice Aboyade-Yebovi said the victim was innocently sold into slavery by the suspect.

She said, “We made an arrest of this trafficker. From our findings, we understand that he has been in the business for some time. He sends the victims abroad, to an Arab country to some of his collaborators. They used the victim as ‘slaves’, and he makes money out of the business.

“When this particular case was reported to us, we acted and through our intelligence gathering we traced the victim to Oman and we arranged how she came back from that country to Nigeria.”

The commander said the suspect had been handed over to the National Agency for the Prohibition of Trafficking in Persons for onward  investigation and prosecution.

“We have been sensitising our people to let them know that the victims were being sold into slavery. Some of the victims are being assaulted sexually and also to face all sorts of inhumanities at the foreign land,” she stated.

However, the suspect, Modupe, who admitted that he ran a job agency, denied the allegation of being a trafficker as he said he assisted the victim to get a home-help job in the foreign land.

He said, ” She (victim) came to me to help her get job abroad and I told her the type of job available, and she agreed to do it . I didn’t lure her into it.”
Top Stories