The wife of the security man who was beaten to death by Naval ratings has cried out for help.

Mary Peter and her daughter
Mary Peter is grappling with the bitter part of life – more than her fragile posture could bear.
She cried her heart out in February this year when she lost her second child five months after birth.
No one was around to soothe her except Bitrus who she described as a loving husband.
But just as the wound began to heal, Bitrus, ‘the healer,’ went on a journey of no return.
The 29-year-old security guard on Gabriel Okoyi Street, Ikate-Lekki, Spring Bay Estate, Lagos State, was tortured to death by two naval ratings and his colleagues for allegedly stealing a piece of jewellery belonging to one Seun, a tenant at a house he (Bitrus) manned.
Seun had invited the naval men and two other security guards to probe and beat the Bauchi State indigene, who eventually led his tormentors to a man he sold the necklace to and N100,000 was recovered from the buyer.
Afterwards, they descended heavily on him and the buyer during which the former passed out and was rushed to the Lagos Island General Hospital where he died some hours after.
In one of the photographs capturing the torture, Bitrus rolled on the floor as one of the officers raised his leg to kick him. In another picture, the buyer was forced into a mud inside drainage.
But as dehumanising as the punishment meted out to them was, Mary had wished her husband lived to bear pains like the the buyer. “I was in the market that morning when he was being tortured,” said Mary, sharing the experience with City Round earlier in the week.
“I came back and met my husband on the ground. He could not talk or do anything.  I left my child in the shop and people helped in taking him to hospital. The following day, July 21, around 2 am, he gave up.”
Mary suddenly assumed widowhood. Loneliness, thoughts of her dead baby boy and how to take care of her ailing daughter, Precious, have crowded her mind.
She recalled, “My husband and I did not talk before he died. He and his daughter did not talk. He was unable to tell us what actually happened. He just left us. One of our two children died early this year when he was five months old. As a widow, I can’t take care of our only surviving child. Nobody to help me pay her school fees and she always falls sick. She is a sickle cell sufferer.
“In a year, we could spend up to N100,000. Her dad is dead now; who will help me to care of her? Losing a husband and child the same year is not easy.”
Indeed, the pain is better imagined especially for a woman like Mary whose six years in marriage revolved round love and care. Despite living in poverty, the family’s status was never a source of concern. Against all odds, joy and love kept them going.
“On Friday (July 19), we talked about love,” she contnued. “I took food home from the market that Friday and we ate it together. He didn’t want to eat it. I told him that whatever we have, if we eat together, God will bless our family. And God has always been there for us. We ate it, laughed and slept.
“I really miss my husband. He used to help me. If I was in the market and he was at home, he would help me fetch water and tidy up our room. At times, he was the one that took the responsibility of washing our clothes. Whenever he was free, he would come to my shop to help me sell. 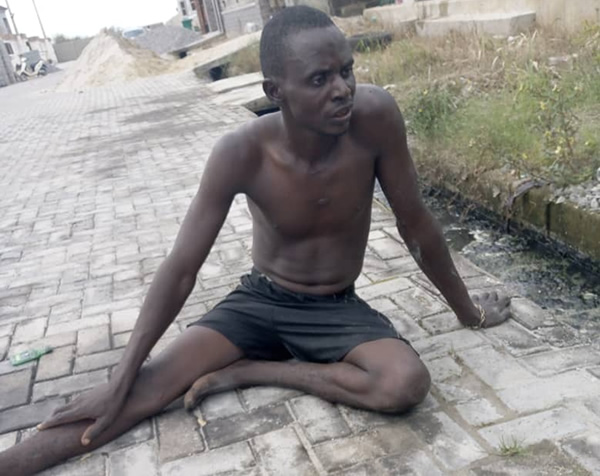 Late Bitrus
Late Bitrus
“I really love my husband. Since we got married, I never heard complaints about him much less accusing him of stealing. I want the government to be responsible for the treatment of my daughter and provide for her upkeep.
“Since my husband died, nobody knows how I feed her and how she feels. She fell sick two weeks after her father died. I cried. How would I cope with this kind of life at this young age? I want the police to ensure justice is served in this matter.”
The daughter, Precious, a six-year-old Nursery 2 pupil, would also miss her dad. She was used to parental affection. She could not believe the love would be cut short when she needed it most.  “I miss him a lot,” she said of her late father. “He would bathe me and took me to church on Sunday. He would bathe me and take me to school every day. When I am going to school, he would give me N50. I want to see my daddy again.”
The police had arrested the two security guards while the Nigerian Navy had ordered the arrest of the two naval ratings. Seun is still at large.
The Command Information Officer, Western Naval Command, Lagos, Commodore, Tom Otuji, told City Round on Friday that the naval men had been taken into custody for investigation.
He said their details and the position of the Force would be made known upon the conclusion of investigation.
“Navy doesn’t cover up issue. I can assure you that the outcome of investigation will be disclosed,” he added.
Culled from Punch
Top Stories