Shocking! Sen. Ekweremadu Assaulted And Chased Out Of Event By IPOB Members In Germany


Nigerian senator, Ike Ekweremadu has been assaulted and chased out of an event in Germany by IPOB members. 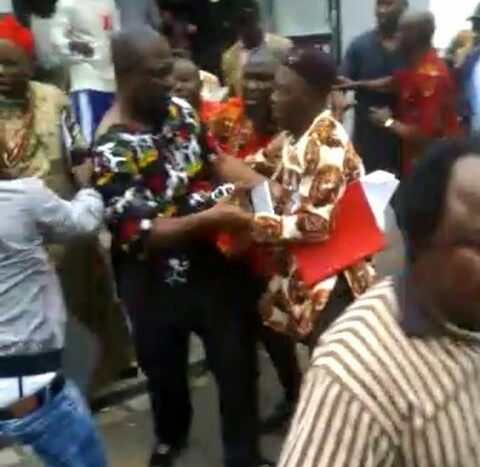 Ekweremadu was attacked at the event
Nigeria’s former Deputy Senate President, Ike Ekweremadu, was on Saturday physically attacked by a mob while attending a cultural event in Germany.

Mr Ekweremadu, who confirmed the attack in a statement, said the attackers were members of the Indigenous Peoples of Biafra (IPOB), a South-East secessionist group.

Earlier in the day, a video of the attack was widely circulated on social media.

In the video, a mob attacked Mr Ekweremadu as he attempted to enter the venue of the event in Nuremberg, Germany.

In the one-minute video, the mob chanted ‘go back’ while trying to deny Mr Ekweremadu entry.

The lawmaker had initially retreated but later turned back towards the entrance of the venue. In reaction, the men furiously dragged Mr Ekweremadu out of the venue, ripping his cloth.

In another version of the video seen by this newspaper, the mob chanting songs in Igbo language, rough-handled the Senator and guided him to a waiting vehicle which immediately whisked him away. Some of them pelted the vehicle.

“People are dying on a daily basis, people are being imprisoned for nothing. We are here enjoying life…We don’t want them here,” one of them who spoke in English said.

“This is Ike Ekweremadu in Nuremberg Germany,” another person said at the end of the video.
How it happened – Ekweremadu

In a statement reacting to the incident, a media aide to the lawmaker, Uche Anichukwu, claimed Mr Ekweremadu was well received by the Ndi-Igbo community in Germany.

The statement said things, however, went out of hand when members of IPOB frontally denied the lawmakers entry to the venue of an event to which he was invited to deliver a speech.
Mr Ekweremadu was quoted as saying: “I attended the Second Annual Cultural Festival and Convention organised by Ndi-Igbo Germany in Nurnberg today where I was billed to give a keynote address along with the President-General of Ohanaeze Ndigbo, Chief Nnia Nwodo, who, however, could not make it eventually.

“I was given a resounding welcome by Ndigbo in Germany and everything went smoothly until some men, who identified themselves as IPOB members stormed the venue and began to complain about the killings in the South East, stressing that there would be no Igbo event at the venue.

“I tried to engage them, but when they became unruly, I had to leave the venue. The organisers also invited the police and I was accompanied out of the venue.

“Much as I am disappointed in their conduct, especially as I am one of the persons, who have spoken up on justice for Ndigbo, the Python Dance, judicial killings in Igbo land and elsewhere both on the floor of the Senate and in my written and personal engagements with the Presidency as well as rallied the South-East Senate Caucus to secure Mazi Nnamdi Kanu’s release with Senator Enyinnaya Abaribe taking him on bail to douse tension in the South East, I nevertheless do not hold this to heart against them, for they know not what they do.

“I have received thousands of solidarity calls and messages from well-meaning Ndigbo. I want to assure them that I am hail and hearty. I have also spoken with the Nigerian Ambassador to Germany, Ambassador Yusuf Tuggar.”
‘Ekweremadu Not doing enough’

Some comments that followed the video on social media appeared to show that members of IPOB and their sympathisers believe Mr Ekweremadu is not doing enough for their course.

IPOB and its leader, Nnamdi Kanu are campaigning for an independent country of Biafra made up of ethnic Igbos. Mr Ekweremadu, on the other hand, has, at different times, clamoured for a restructuring of the country, a position almost directly opposite the agitation by the group.

In a video in February, Mr Kanu said he fled to Israel because it is the safest place for him to stay alive and achieve his dream of a Biafra Republic.

The IPOB leader, who is facing charges of treasonable felony at the Federal High Court in Abuja, had called for a boycott of elections in Anambra in November 2017 if the government failed to set a date for a referendum.
Top Stories