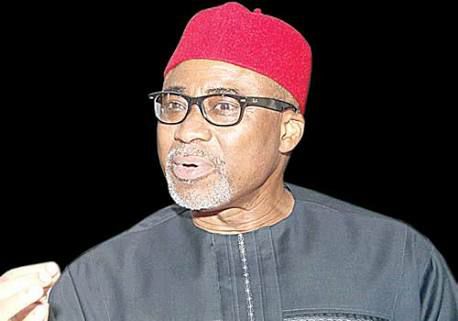 Senator Abaribe
The Minority Leader of the Senate, Enyinnaya Abaribe, has described as reprehensible and utterly sacrilegious,  the attack on former Deputy Senate President, Ike Ekweremadu by some persons in Nuremberg, Germany, on Saturday.
According to Punch, Abaribe, in a statement on Sunday,  condemned the act and noted that the attackers,  who claimed to be members of the Indigenous Peoples of Biafra, were obviously ignorant of the prevailing situation at home.
Abaribe described the attitude of the IPOB members “as a brazen show of ingratitude to a man who has been at the forefront in the struggle for all that is good for the Igbo race”.
The Minority leader said he and the entire minority caucus in the Senate are appalled on the very nauseating attack on Ekweremadu for no reason whatsoever.
“We condemn it”, Abaribe said.
The leader of the opposition in the red chamber noted that he and Ekweremadu stuck out their neck to arrange and stand for surety for the IPOB leader, Nnamdi Kanu.
He said, “Obviously this is not how to repay a man, an outstanding leader of men, an unpretentious Igbo leader.
“He has given his all even going as far as deploying his means to arrange for the bail of Nnamdi Kanu, not minding the repercussions to his illustrious political career.
“It is unfortunate. The perpetrators of the attack should know that as the  Igbo, we respect elders and reverence our leaders.
“The unwarranted attack is not the character of the Igbo. This is un-Igbo.
“It is most worrisome and even inconceivable that the attackers will choose an auspicious occasion where our people are celebrating and showcasing our rich culture to exhibit such unbecoming and condemnable conduct in the name of agitation.
“No, that was not agitation, no right thinking human will identify with such behaviour.
“Yes, Nigeria is going through a horrendous phase, which is a fault line that her leaders, particularly we the Igbo leaders are engaging others to find a lasting solution to.
“Resorting to mob mentality and venting the spleen on our leaders rather creates a vacuum that will leave our people helpless and confused in the circumstance”, he said.
Abaribe noted that there were rules of engagement in the country when things go awry and that it was the way everyone should go until there was an acceptable national consensus in which Senator Ekweremadu will always play a major role.
He, however, appealed to Ekweremadu not to be discouraged in any way, but rather be stoic and take it in its stride as the price often paid in leadership.
Watch video of Ekweremadu being beaten:

Ekweremadu being attacked in Germany stands condemned. But this is also a lesson to all Nigeria politicians if you think you're big and cannot be touched go abroad where your fuck up can actually be treated without the help of DSS or Police 😂😂😂#BoysArentSmiling😂 pic.twitter.com/5iCiqTL4n6

"Most Of The Time, We Are The Bad Friends We All Complain About" - Actress, Toyin Abraham
Recent Stories