A young boy who was kidnapped from Ogun and then sold off for N1 million has been recovered in Anambra. 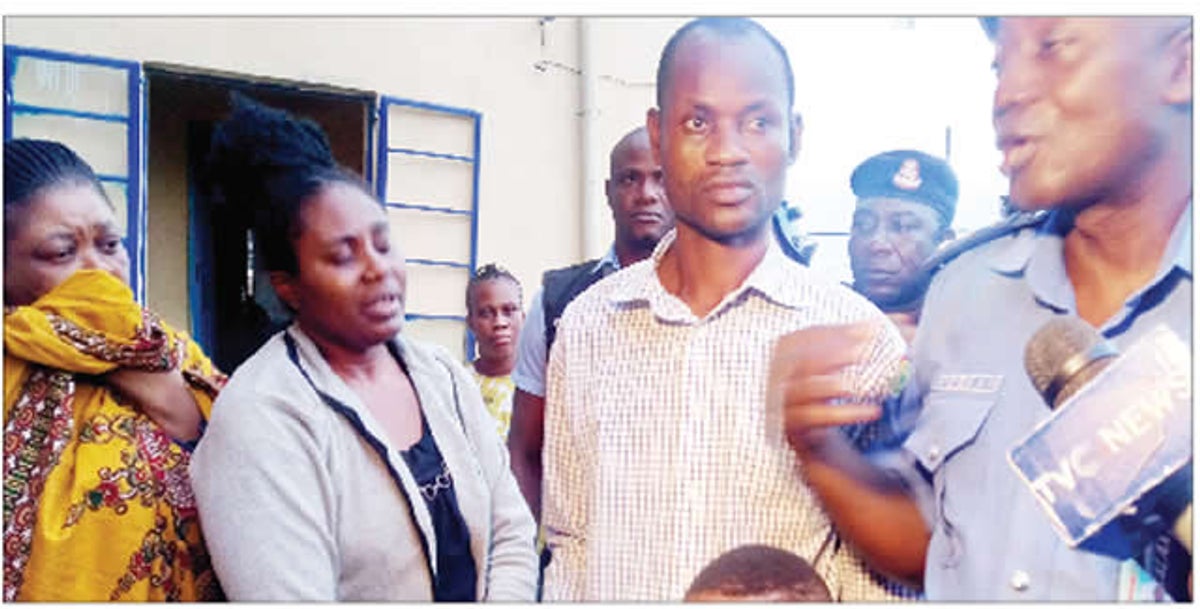 The suspects with the boy’s father and Oyeyemi
According to a report by Punch Metro, a seven-year-old boy, Joshua Joseph, who was declared missing two years ago, has been found with his adopted mother, Blessing Ozor, who allegedly paid N1.05m for his ‘adoption’.

Joshua was declared missing by his parents, who live in Ijebu-Ode, Ogun State, in 2017, but he was found by men of the state police command in Anambra State.

The boy, who had been renamed Chisom, was reportedly found in the home of Ozor, who claimed to have adopted him after paying N1.05m to a level-13 civil servant in the Anambra State Ministry of Women Affairs, Ifeoma Joy.

The Ogun State Commissioner of Police, Bashir Makama, gave the details at the state police headquarters, Eleweran, Abeokuta, on Sunday, while handing over Joshua to his father and parading Ozor and Joy in connection with the incident.

Makama said the boy was found after a thorough investigation by operatives of the command over the last two years.

The police boss stated that Joshua was stolen in Ijebu-Ode and sold to Ozor.

He said Joy belonged to a three-member syndicate, which specialised in stealing children and selling them to their clients.

It was gathered that two other members of the syndicate, Rita and Angela, were been held in prisons in Edo and Ondo states, respectively, for the same offence.

It was gathered that both Rita and Angela gave information from their prison cells that led to the recovery of the boy and the arrest of Ozor and Joy in Anambra State.

The Police Public Relations Officer in Ogun State, Abimbola Oyeyemi, accused Joy of collecting over N1m from the acclaimed adopted mother and forged adoption documents from the Anambra State Ministry of Women Affairs.

Oyeyemi stated, “Joy is working at the Ministry of Women Affairs in Anambra State. She used the opportunity to arrange buyers for stolen children.

“In the cause of looking for her, she got transferred to four local government councils within one month in order to evade arrest.

“Our findings showed that eight children had been stolen by this syndicate from Ogun State and four had been recovered.

“One of the stolen children was found when the people, who adopted him, saw the boy’s picture on the pages of newspapers and returned him.”

While speaking with journalists, Joy denied the allegation against her, saying she was not involved in such an act.

She said, “I never did such a thing. I know the woman, who brought this boy, as a worker at the Peace Sisters’ Home.

“So, when my sister in fellowship (Ozor) came up with the idea of adopting a child, I called the other woman to help us get a boy and I gave Rita my sister’s particulars. When she finished with the particulars, she now came with this boy. I never knew the boy was stolen.”

Ozor said she gave Joy N150,000 for processing of the adoption papers and additional N900,000 when the deal was completed.

Ozor said amid sobs, “I am just a victim of circumstances by my foolishness. I went to a sister in our fellowship, who had adopted a child before, because I have two daughters already but I had a feeling for a son; my last daughter is 24 years old.

“I went through Rita because she and her husband had adopted a child before and they led me to this woman, Joy. I believed that everything was okay because she made me believe that she runs the Peace Sisters Home.”
Top Stories