A young Nigerian woman has been found out to have thrown her own newborn baby inside a gutter in Ondo. 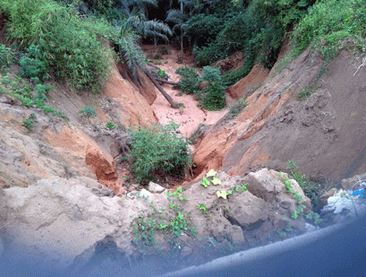 File photo
According to a report by Vanguard, a 21-year-old woman, Oluwaseun Samuel, has been remanded in prison custody by an Akure Chief Magistrate’s Court for killing her day old baby boy by dumping him in a gutter.
The accused was said to have committed the offence on August 1, at about 4am at lnufele area, Owo, Ondo State.

Police prosecutor Suleiman Abdullateef, said the offence contravened section 327 of the criminal code, cap 30, vol 1, law of Ondo State of Nigeria 2006.
Abdullateef prayed the court to remand the accused person in prison custody pending the advice from the office of the Director of Public Prosecution in the Justice ministry.

Counsel to the accused Adeola Kayide did not oppose to the remand application sought by the police prosecutor.

The trial Magistrate’s Victoria Bob- Manuel thereafter ordered her to be remanded at Olokuya Prison pending the issuance of the legal advice from the DPPs office.

Meanwhile, a 30year old man, Famaye lleasanmi, has told an Akure Chief Magistrate Court sitting in Oke Eda, Akure that he stole to feed his children.

He was dragged to court for stealing a motorcycle and some other items on August 16 at about 930am at Oke Owu community Oba ile, Akure.

The accused who pleaded not guilty to the crime, told the court that he carried out the act to feed his hungry children.

Police prosecutor Martins Olowofeso said the offence was contrary to and punishable under section 516 of the criminal code cap 37 vol 1 law of Ondo State, Nigeria 2006.

Olowofeso prayed the court to remand the accused in prison pending am advice from the Director of Public Prosecution in the Ministry of Justice.

He informed the court that the accused person conspired with others still at large and broke into the house of one Ajayi lbikunle where they stole items valued at N232,000.

Trial Chief Magistrate Ruth Olumilua thereafter ordered him remanded in prison custody in line with the prosecutors application pending a legal advice from the DPPs office.