Check Out Profile Of Festus Keyamo, Minister Of State For Niger Delta Affairs 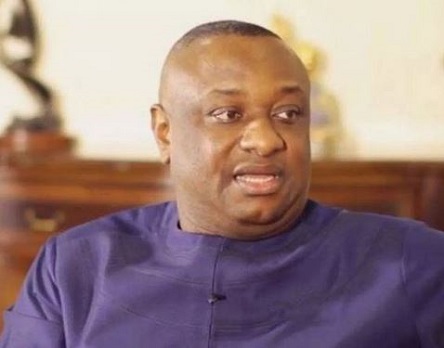 Mr. Keyamo, a lawyer, social crusader, critic, and columnist is an intriguing personality until his new appointment was the Director, Strategic Communications in President Muhammadu Buhari’s Prudential Campaign Organisation.

Born in Ughelli, Delta State of Nigeria on January 21, 1970 by a father who hails from Effurun, Warri, in Delta State and a mother from Ilaro in Ogun State, Festus Keyamo attended OHARISI (Model) Primary School, Ughelli, 1975 to 1981, Government College, Ughelli, 1981 to 1986 and received his Higher School Certificate (HSC) course in the same school.

He was called to the Nigerian Bar on December 15, 1993, setting the stage for a colourful career in law.

Keyamo started his legal practice in Gani Fawehinmi Chambers in Lagos at the height of the agitation for the revalidation of the June 2, 1993 election.

As a young lawyer, he was on the front row of legal activism representing icons like Dr. BEko Ransome-Kuti, Chief Frank Kokori, and Ken Saro Wiwa as well as the duo of Chief M.K.O. Abiola and Anthony Enahoro who were arrested in 1994 and other NADECO leaders.

He left Gani Fawehinmi Chambers in 1995, to establish his own law firm, FESTUS Keyamo CHAMBERS, which has since grown rapidly with the Head Office at No. 1 Festus Keyamo Lane, Anthony Village, Lagos State with branches in Abuja and Warri (Delta State), and liaison office in many states.

Keyamo has handled several controversial and landmark cases. He was counsel to the leader of the Niger-Delta Peoples’ Volunteer Force, Mujaheed Dokubo-Asari in his trial for treasonable felony, lead counsel in the treason trial of the leader of the Movement For The Actualization of the Sovereign State of Biafra (MASSOB), Chief Ralph Uwazuruike and other MASSOB leaders as well as counsel in the brutal murder of Elder Statesman, Chief Bola Ige.

As one of the prosecutors for the Economic and Financial Crimes Commission (EFCC), he has secured the conviction of six public officers by full and complete trial (not plea-bargain). Recently, he went to court to challenge the power of the Nigerian President to unilaterally appoint Service Chiefs without the approval of the National Assembly.

He has helped many youths of Delta State unjustly arrested and detained by the authorities free of charge and has been working closely with his Uvwie community for some years now on several issues.

He was honoured with many awards, which include, Best Single Advocate of Nigeria Law Students, (Taslim Elias Moot Trial Competition) 1992; Honorary Alumni, of various Students’ Associations; Activist of the year (2001) by the Students Union, University of Jos; Listed in the New Who is Who in Nigeria, 2003; and nominated for the World Medal of Honour, 2003, by the American Biographical Institute, in 2005.

Keyamo was conferred with the chieftaincy titles of Ogba-Uri of Ogor Kingdom (Strong man of the law) 2005 and Omorokaro of Uvwie Kingdom (The child who leads the way) 2011 in Delta State but prefers to be called ‘Mr.’
Top Stories