President Buhari To Jets Out To Japan On Sunday


The Japanese Prime Minister and host, Shinzo Abe, will perform the opening ceremonies of the TICAD7. 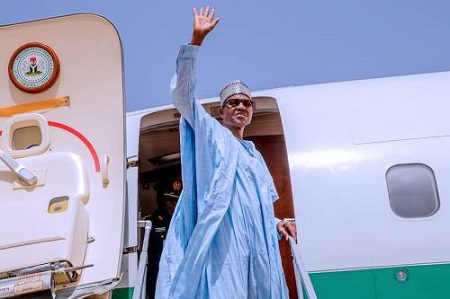 President Muhammadu Buhari will travel to Japan on Sunday (tomorrow) to attend the Seventh Tokyo International Conference on African Development, the Presidency has said.

The TICAD7 will take place in the City of Yokohama from August 28 to 30.

The President is expected back on August 31.

The TICAD6 was held in Nairobi, Kenya in August  2016 and Buhari also attended it.

This year’s has the theme, Africa and Yokohama, Sharing Passion for the Future.

The Japanese  Prime Minister and host, Shinzo Abe, will perform the opening ceremonies of the TICAD7.

A statement by the Special Adviser to the President on Media and Publicity, Mr Femi Adesina, “President Buhari will be accompanied by Governors Babagana Zulum, AbdulRaham AbdulRazaq and Babajide Sanwo-Olu of Borno, Kwara and Lagos states respectively; ministers and other top government officials.
Top Stories